The SOL8SDR2x1W-P is designed to meet the requirements of unmanned platforms, enabling high-speed, long-range, encrypted links for the reliable transfer of video, audio, data, and general IP network traffic in real-time environments all within a low size, weight and power compact enclosure domo-tactical-communications By DA Team / 14 Sep 2021

Fundamental to DTC’s advantage is the industry leading MeshUltraTM family of Tactical MANET Mesh waveforms interoperable across all DTC platforms. The SOL8SDR2x1W-P utilises MeshUltraTM to provide High Bandwidth communication in challenging, dynamic, Non-Line-of-Sight (NLOS) environments where our users operate. MeshUltraTM Waveform is spectrally efficient and can operate at various RF channel bandwidths from 1.25 MHz, 1.5 MHz, 1.75 MHz, 2.5 MH to 20 MHz. With adaptive modulation up to 64QAM, DTC’s MeshUltraTM supports data rates of up to 87Mbps.

Following the success of the DTC MeshUltraTM MANET waveform, DTC’s new MeshUltraTM-X waveform offers optimized performance for large networks of up to 144 radios, operating in channels as narrow as 1.25MHz and on a single frequency. Perfectly meeting the needs of large drone swarms and applications where a large number of radios need to operate efficiently in a limited spectrum.

With very low power consumption, the SOL8SDR2x1W-P includes a rich set of interface options including native Ethernet, dual USB and serial as well as an audio headset interface.

The SOL8SDR2x1W-P is not the only DTC launch at DSEI. A new revolutionary Web User Interface (WUI) has also been revealed for the NETNode Phase 5 and SDR IP Mesh families with future integration into the SOL7 COFDM Receiver and Transmitter range.

The new WUI, with its contemporary look and enhanced ease-of-use, will mean a more intuitive user experience for DTC customers, whether on PC, tablet or phone. Features include a customisable dashboard and simpler performance information, brand apps such as tactical display and telemetry controller and an easier way of creating new configurations. 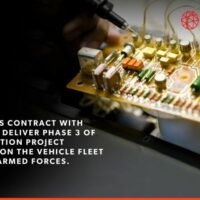