A pitot probe, also known as a pitot tube, is a device used to measure fluid flow velocity for various needs, such as:

A basic pitot probe is made up of a tube containing fluid that points directly into the fluid flow, measuring the pressure.

A static probe is the most common pitot probe used on an aircraft and instead contains a diaphragm that measures dynamic pressure. These can be mounted on the side of the fuselage or a boom on the nose or leading edge of a wing or fin and are connected directly to the airspeed indicator in the cockpit. 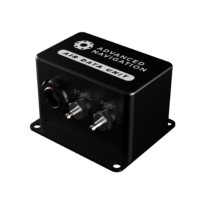