SPICE 250 ER will incorporate a miniature turbo-jet engine with an internal JP-8/10 fuel system, providing the weapon a range of at least 150 km rafael-advanced-defense-systems News By DA Staff / 12 Feb 2021 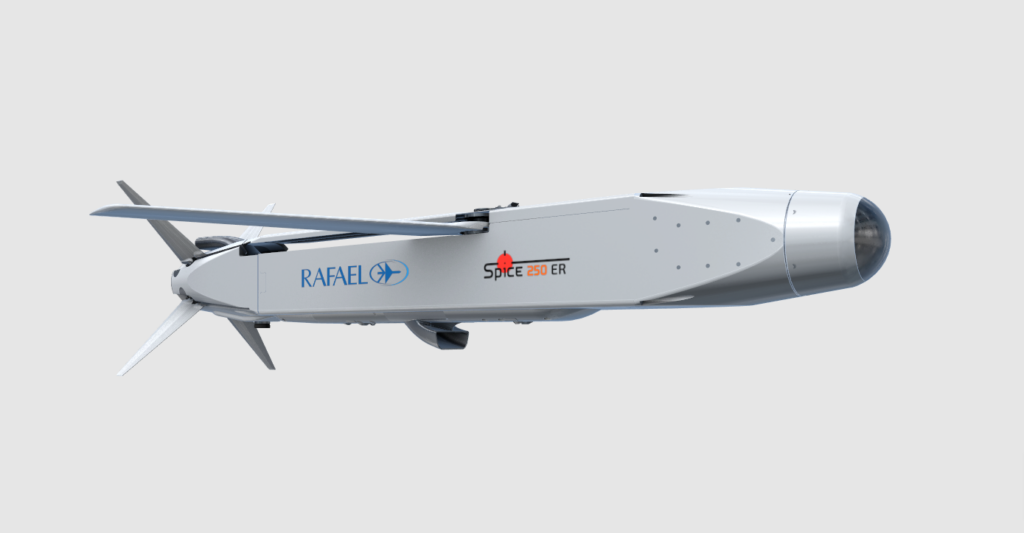 Rafael Advanced Defense Systems has unveiled a new variant of its SPICE 250 air-to-surface munition, with the addition of an integrated turbojet engine.

The new variant dubbed SPICE 250 ER (Extended Range) is based on the smallest of the SPICE Family, which includes the SPICE 250, SPICE 1000 and the SPICE 2000 guidance kits. SPICE is a stand-off, autonomous, air-to-surface weapon systems that strike targets with pinpoint accuracy and at high attack volumes, independently of GPS navigation, based on its autonomous electro-optic Scene-Matching Artificial Intelligence (AI) Algorithms.

SPICE 250 ER will incorporate a miniature turbo-jet engine with an internal JP-8/10 fuel system, providing the weapon a range of at least 150 km, while retaining the same mission-planning system, aircraft interfaces and aircrew operation.

SPICE 250 uses a common aircraft interface and sophisticated Smart Quad Rack (SQR) which simplifies the effort needed for aircraft integration. Four SPICE 250 weapons are carried on each SQR. SPICE 250 can be directly mounted on light attack aircraft store stations, thanks to its small size and light weight.

The newly-unveiled ATR feature is a technological breakthrough, enabling SPICE 250 ER to effectively learn the specific target characteristics ahead of the strike, using advanced AI and deep-learning technologies.

Before or during flight, target type, location and strike characteristics are defined for each weapon, either by the automated mission-planning or by the pilot. The weapons fly towards the targets, using their INS for initial navigation. When approaching the target area, the weapons use their ATA and ATR modes for detection and recognition of the targets and precise aim-point. Each weapon homes-in on the pre-defined target, either autonomously or with a human-in-the-loop, aided by the ATR algorithm.

The combination of the increased loadout of SPICE 250 variants, the unique homing methods for various scenarios, and the extended range, enable a high volume, autonomous, precision-strike capability against multiple target types, with assured very low collateral damage and at a cost-effective price-point.

SPICE is combat-proven and in operational service with a number of international customers.