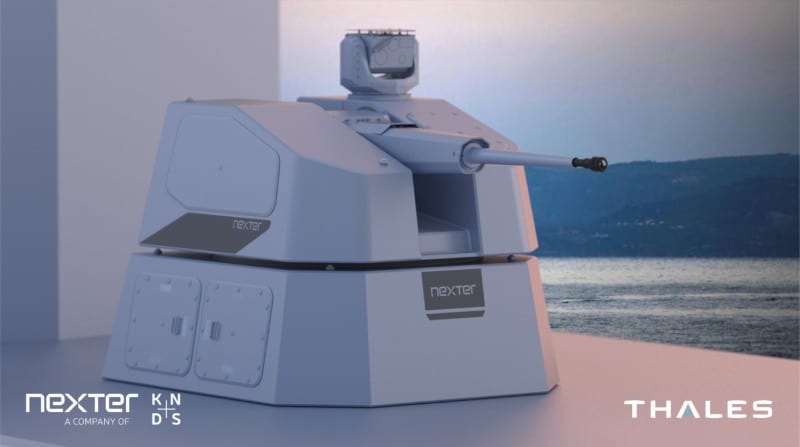 The temporary consortium formed by Nexter and Thales unveiled the RAPIDFire system turret in its final form on the Nexter stand at the Euronaval 2022 event.

This remotely operated naval and land artillery system is designed to provide platforms with a close-in self-defense capability against air and surface threats.

According to the companies, RAPIDFire is one of the only air defense systems that can autonomously and automatically acquire, identify and destroy a threat using target designation data provided by a combat management system. With a ready rack of 140 rounds of ammunition, corresponding to about 30 interceptions, the system offers effective firepower against drones and swarms of drones, avoiding attrition of surface-to-air missiles in the event of a saturation attack.

Thanks to automatic real-time selection of different types of ammunition, RAPIDFire can defeat threats including personal watercraft, free-floating mines, ships, loitering munitions, unmanned aerial systems, fighter jets, attack helicopters and missiles at ranges of up to 4,000 meters with no risk of collateral damage thanks to the coupling between the fire control system and the turret, and through the use of Anti Aerial Airburst (A3B) munitions.

A3B rounds are time-fuzed for greater effectiveness against all types of targets and cannot be jammed, decoyed or triggered by clutter.

RAPIDFire is built around the 40 mm CTA gun suite and ammunition and has already been adopted by the armed forces of France, the UK and Belgium.

RAPIDFire can be readily adapted for land-based platforms. Thanks to its intuitive user interface and on-the-move firing capability, this system can be seamlessly integrated into a fixed or mobile air defense system to protect combat units on the ground as well as military bases, logistics convoys, sensitive sites and high-value assets.

Key features of the RAPIDFire system include: