The FN Smart ProtectoR from FN Herstal is an integrated, wearable and compact solution, which can be used safely in a proportional manner to deal with threats from individuals who are not using a firearm at short and very short ranges fn-herstal News By DA Reporter / 21 Oct 2021 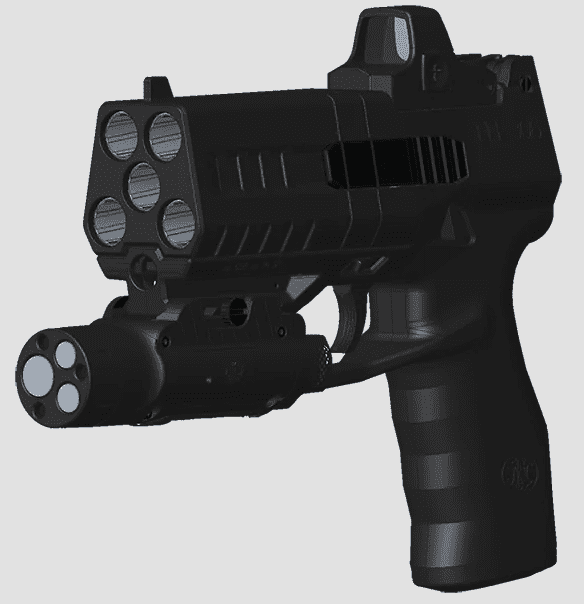 FN Herstal, a major international actor in the field of kinetic energy Less Lethal capabilities, is proposing an alternative to systems such as rubber ball launchers and electroshock handguns for short and very short range engagements with the introduction of the FN Smart ProtectoR.

The FN Smart ProtectoR is an integrated, wearable and compact solution, which can be used safely in a proportional manner to deal with threats from individuals who are not using a firearm at short and very short ranges.

The FN Smart ProtectoR is composed of three complementary elements:

Fitted with a 5-tube magazine, the FN 306 launcher fires 12.55mm FN SP caliber cartridges featuring an elastomer projectile. The elastomer, specially designed for this level of force, has been made to drastically reduce the risk of bodily harm. Both the cartridge and the caliber are specific innovations from FN Herstal.

The incapacitation level of the FN 306 and its ammunition is equivalent to the effect generally given by a strike from a baton (30 joules) with a clear advantage for law enforcement and security forces: being able to intervene from a distance of up to 10 meters, with extreme accuracy.

Unlike some Less Lethal systems on the market, there is no minimum safe distance for intervention with the FN 306. Handling of the launcher, which is compact and similar to a pistol, requires drills and procedures already acquired and mastered by military, law enforcement and security personnel.

Combined with the FN 306, the FN VictoR-SP is an innovative safety enhancing system that captures and analyzes images in real-time to detect the shape of a human body, and categorize specific parts of the body as areas that are authorized or forbidden to engage. If an area that must not be engaged, such as the head, is recognized, the system warns the user or blocks firing.

FN Herstal’s objective is to propose an effective and safe solution that will allow security forces to respect the physical integrity of the individual, or group of individuals, to be engaged.

Come and discover the brand-new FN Smart ProtectoR™ concept on the FN Herstal booth (Belgian pavilion, Hall 5, J042) during the MILIPOL Paris exhibition, to be held from 19 to 22 October 2021.

FN Herstal is presenting the FN Smart ProtectoR at the MILIPOL Paris exhibition 19 to 22 October 2021.