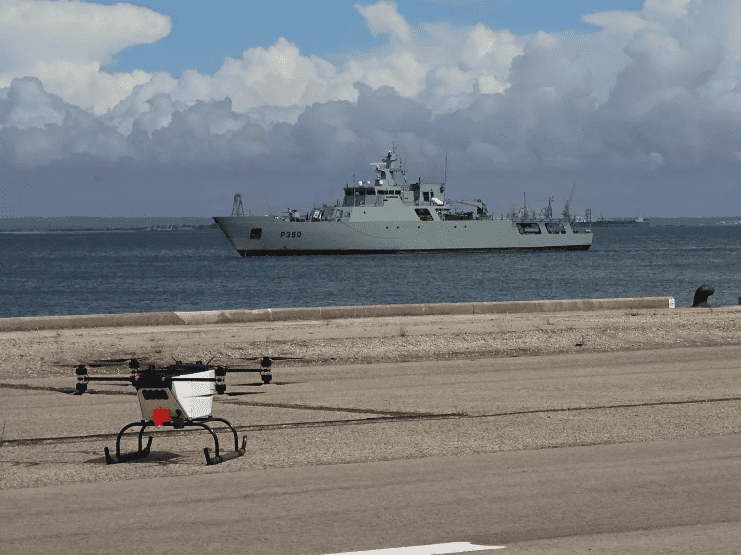 A sub-scale demonstrator of a future Airbus multi-mission Unmanned Aerial Vehicle (UAV) demonstrated its capabilities during a large robotic exercise organized by the Portuguese Navy and NATO, which brought together military forces, universities and selected industry partners.

By taking part in this exercise, the ‘cargo copter’ operated in a dense robotic environment, validating the concept’s usefulness – particularly its modular design for easy, flexible and rapid swap-out of payloads and batteries.

The demonstrator was developed by Airbus’ UAS New Programs group in collaboration with the company’s X-Works rapid prototyping team. A system-of-systems approach was applied with the goal of meeting military mission requirements that range from cargo transportation and Intelligence, Surveillance, and Reconnaissance (ISR) duties to serving as a communications relay and a combat force multiplier.

Its validation occurred in highly realistic operational conditions during the REP(MUS)2022 military exercise, which was conducted in Portugal’s Troia Peninsula region from 12-23 September. Overall, REP(MUS)2022 brought together some 1,500 personnel to test the coordination of unmanned systems and experimental mission scenarios above the water, on the water and under the sea.

“This was a great opportunity to trial our small-scale demonstrator in realistic conditions,” said Jens Federhen, who leads the X-Works rapid prototyping team. “Performing the demonstrations in such a demanding environment – surrounded by six research ships, 11 warships and 120 uncrewed systems around us – was extremely challenging, and at the same time very productive, as we have been able to learn and create useful collaboration links.”

The sub-scale demonstrator of the future Airbus Multi-Mission and Transport UAS is a 35-kg Vertical Take-Off and Landing (VTOL) multicopter. Sized to accommodate a range of payloads, the ‘cargo copter’ is equipped with the Airbus-developed DeckFinder all-purpose landing aid for automatic landings on ship decks.

For the full-scale version, Airbus UAS New Programs envisions a drone capable of carrying payloads of more than 250 kg over a range of more than 300 km. Beyond the military applications, Airbus foresees a role for the Airbus Multi-Mission and Transport UAS in civilian use for humanitarian and/ or disaster/crisis management.