Sikorsky’s Risk-Reduction Tools have allowed for 50% faster production and assembly compared to legacy programs, resulting in a cost-effective, transformational aircraft for the US Army sikorsky News By DA Reporter / 14 Apr 2022 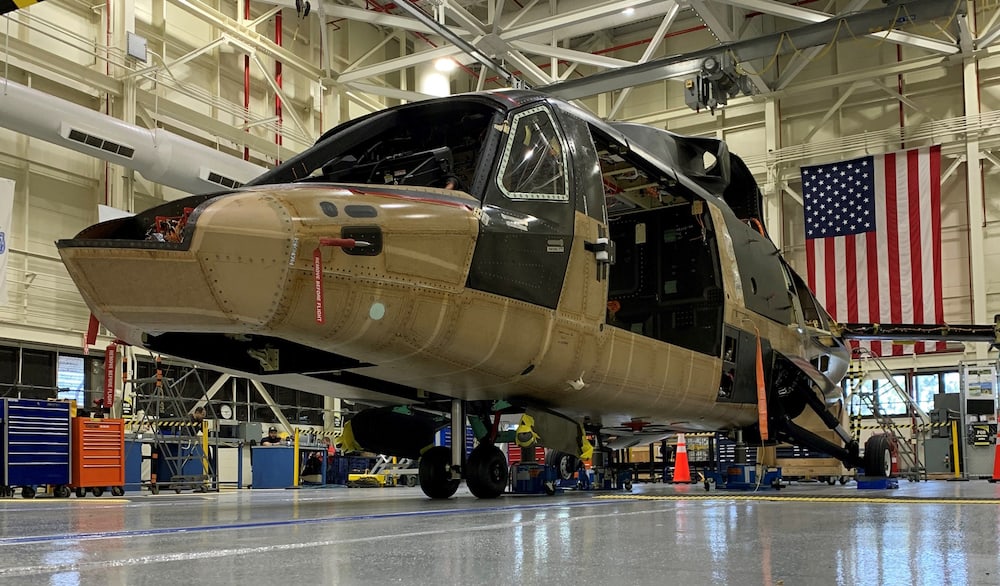 The Sikorsky RAIDER X Competitive Prototype (CP) for the US Army’s Future Attack Reconnaissance Aircraft (FARA) is more than 85% complete, progressing 50% faster through production and assembly compared to legacy programs and resulting in a cost-effective, transformational aircraft.

Sikorsky has made significant progress on RAIDER X, which is now weight on wheels at the Sikorsky Development Flight Center in West Palm Beach, Florida. RAIDER X, which Sikorsky has begun powering on, has accomplished nearly 50% of required System Acceptance Test procedures.

“Our transformational RAIDER X will deliver broad benefits to the Army including the lowest schedule risk and greatest technical maturity of the FARA competitors,” said Sikorsky President, Paul Lemmo. “With X2 Technology, RAIDER X has the ability to grow, unlike a single-main rotor configuration. We’re looking to the future and we are committed to helping the Army deter threats and defend freedoms well into the 21st century.”

In addition, the build of Sikorsky’s second FARA fuselage is now complete. This fuselage is being integrated into Sikorsky’s structural test program and will be used to validate the flight and ground loads capability of the airframe. These tests support the RAIDER X CP flight safety program and provide data to optimize and accelerate the design for the full weapons system.

“We took an innovative approach with our second CP fuselage,” said Sikorsky FARA Chief Engineer, Pete Germanowski. “The second fuselage has not only increased the efficiency of the build and test of our first CP aircraft, it gives us the option to build it out as a second CP aircraft, providing us with more flexibility and greater risk reduction.”

“The FARA mission requires operational flexibility, and RAIDER X provides that operational flexibility the Army needs including speed where it matters, a large multi-functional weapons bay and unprecedented acceleration and deceleration capability,” said Jay Macklin, Sikorsky business development director. “RAIDER X is the most agile, lethal and survivable aircraft, designed for vertical lift dominance against evolving threats of the future.”

Lockheed Martin is leveraging an established, low-risk manufacturing capability augmented by a more than $600 million investment in digital thread and advanced manufacturing. This digital environment is embedded throughout the company’s engineering, manufacturing and sustainment workforce.

RAIDER X fully utilizes Sikorsky’s digital thread and virtual prototyping tools to maximize the capabilities RAIDER X provides to soldiers while optimizing the aircraft’s affordability and sustainability over the life cycle. These virtual models are highly reliable, physics-based simulations of our design that provide early discovery, minimize redesign and enable future upgrades to be efficient and affordable.

The implementation of such advanced processes reduced lead-time for aircraft components by over 50%. Lockheed Martin began manufacturing components for RAIDER X on production tooling while still in conceptual design. Less than a year later, completed hardware components were available for customer review, including comprehensive aircraft assembly simulations for all components.

One of the primary risk reduction efforts is flight test data from the S-97 RAIDER, which is funded entirely by Sikorsky. The S-97 RAIDER is an 80%-scale prototype of the RAIDER X design, and the flight test program informs design decisions, correlates to a virtual prototype and enables Sikorsky to experiment with the unique capabilities that X2 technology provides.