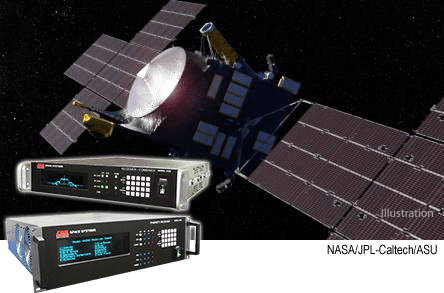 Originally purchased to support previous successful Mars programs, GDP’s telemetry receivers have now been repurposed to test the RF transmitter for the Psyche mission; a journey to a unique metal asteroid orbiting the Sun between Mars and Jupiter.

By spring of 2022, the spacecraft will be fully assembled and ready to ship to NASA’s Kennedy Space Center in Cape Canaveral, Florida, where it will launch in August 2022. Psyche will fly by Mars for a gravity assist in May 2023 and in early 2026, it will slip into orbit around the asteroid, where it will spend 21 months gathering data for analysis.

These critical JPL missions presented a unique and difficult task for the Model 4426 Telemetry Receivers; to support extremely low bit rates and poor signal to noise ratio, down to 10 bits per second with convolutional encoding. For testing the Psyche transmitter, the receiver is now processing a QPSK signal at 1.08Mbps and is capable of operation up to 40Mbps.

“Our receiver product line offers unmatched performance, features, and functionality in a cost-effective solution” stated Gary Thom, President of GDP Space Systems. “We are very excited to be a part of this historic mission to understand the origins of our planet.”

GDP Space System’s telemetry receivers were also selected for use in the successful mission that landed the Curiosity rover on Mars for remote exploration and for the Perseverance rover, which recently arrived on Mars.