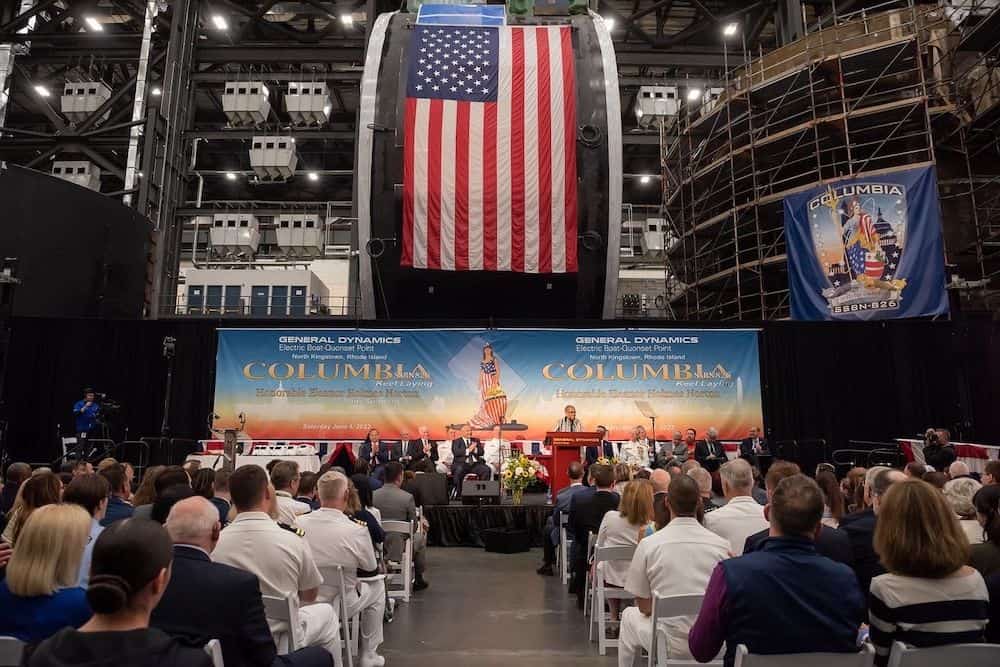 Keel laying is an event in which the initials of the boat’s sponsor are welded onto a plate attached to the submarine.

District of Columbia is the first Columbia-class ballistic missile submarine being constructed in the minimum 12-ship class, which will replace the existing 14 Ohio-class nuclear-ballistic submarine force due to begin retiring from service in 2027.

Adm. Daryl Caudle, commander, US Fleet Forces Command, highlighted the significance of ballistic missile submarines as the most survivable leg of the US military’s nuclear triad.

“As every ballistic-missile submarine has since the keel laying of USS George Washington (SSBN 598) here at Electric Boat in November 1958 – the District of Columbia, and all those in its class will continue to serve as the most survivable leg of the nuclear triad – standing constant watch far beneath the waves, as we have done for over 63 years – a stalwart deterrent against those who would seek to do the unspeakable,” said Caudle.

Caudle also spoke on the keel laying of District of Columbia as a historic occasion in ensuring American’s freedom and way of life for the foreseeable future.

“Laying the keel of the future USS District of Columbia truly is a historic occasion – not only for the countless designers, welders, metal workers, electricians, and master craftsmen whose unmatched expertise, ingenuity, hard work, and dedication will bring this modern marvel to life – but for the future Sailors who will prowl the deep inside her hull, protecting our nation, deterring strategic attacks, and ensuring our freedom and way of life for decades to come,” said Caudle.

Secretary of the Navy Carlos Del Toro, the event’s principal speaker, echoed Caudle’s sentiment on the importance of the Columbia-class being the largest, most capable and most advanced submarine produced by the US as an insurance policy.

“As Admiral Caudle detailed, the Columbia class will be the cornerstone of our strategic deterrence, the ultimate guarantor of our National Security,” said Del Toro. “Our strategic submarines represent approximately 70 percent of America’s deployed nuclear arsenal.”

Del Toro continued to speak on the need to modernize the US Submarine Force to ensure the safety and security of the world: “Potential adversaries know the silent service is on patrol at this very moment, but they don’t know where and that protects us all,” said Del Toro. “The venerable Ohio-class that has guarded us for decades is nearing the end of its service life. For the safety of our Sailors, and the security of our world, we must modernize our fleet, and our nuclear command, control, and communications systems.”

Congresswoman Eleanor Holmes Norton (D-DC), the boat’s sponsor and the delegate to the House of Representatives from the ship’s name, the District of Columbia, attended the ceremony. Her initials were welded onto a plate by Electric Boat welder Maria Betance-Pizarro.

“As a third-generation Washingtonian, I am excited and honored to be the sponsor of the future USS Columbia,” said Norton. “I look forward to meeting and establishing relationships with the men and women who will serve aboard her.”

The US Navy, alongside Electric Boat, began the conceptual designs for Columbia in 2007 as a replacement for the Ohio-class ballistic-missile submarines. The Columbia-class will carry 16 missiles each, which in total represents approximately 70 percent of the US nuclear triad.

The Columbia-class remains the Navy’s number one acquisition priority and is scheduled to see its first delivery in 2027. The transition from the Ohio-class ballistic-missile submarines to the new Columbia-class will ensure continuous sea-based strategic deterrence into the 2080s.

At a length of 560 feet and displacing 20,810 tons, the Columbia will be the largest submarine ever built by the US. Its reactor will not require refueling during the lifetime of planned service making the ship more cost-effective to operate and maximizing its time in deployment. In addition to its complement of missiles, the submarine will be armed with Mk 48 torpedoes and will feature superior acoustic performance and state-of-the-art sensors to make it the most capable and quiet submarine ever built.

The Submarine Force executes the Department of the Navy’s mission in and from the undersea domain. In addition to lending added capacity to naval forces, the Submarine Force, in particular, is expected to leverage those special advantages that come with undersea concealment to permit operational, deterrent and combat effects that the Navy and the nation could not otherwise achieve.