Cobham Mission Systems’ pyrovalves ensured the isolation of combustion products until they were needed, releasing fuel on cue and enabling precise navigation and landing of the Perseverance rover By DA Editor / 19 Mar 2021 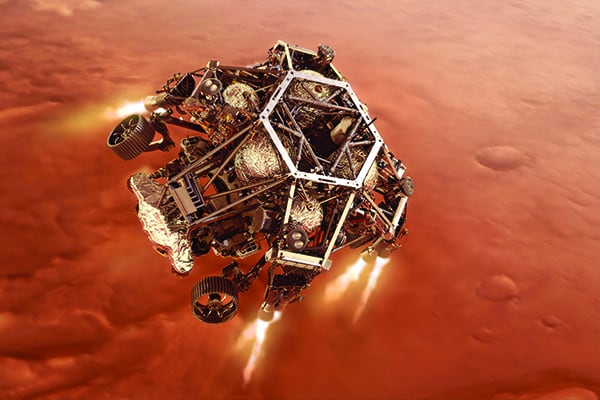 Cobham Mission Systems’ space pyrotechnic valves, on the NASA Perseverance rover mission, enabled a historically precise landing on Mars. During the final minute of the flight, as the rover shifted from parachute to retrorockets to control the descent, eight pyrovalves fired precisely on cue. Opening instantaneously, the pyrovalves allowed exactly the fuel required to support a guided entry, descent and landing on Mars, which placed the rover within the targeted landing ellipse.

“We have a long heritage of providing space technologies, starting with the design of John Glenn’s breathing regulator used in the world-famous Project Mercury flight in 1962. Nearly sixty years later, we are delighted to play a role in the successful Perseverance rover Mars landing,” stated Ryan.

An essential component of space vehicle and satellite propulsion systems, pyrovalves ensure the isolation of combustion products, releasing fuel whenever (and only when) it is required. For the seven-month Perseverance rover flight, the Cobham Mission Systems pyrovalves were locked closed, to safely isolate fuel until the final minutes of the journey. By releasing needed fuel on cue, the pyrovalves enabled precise navigation and landing of the Perseverance rover into the scientifically rich location selected by NASA scientists.