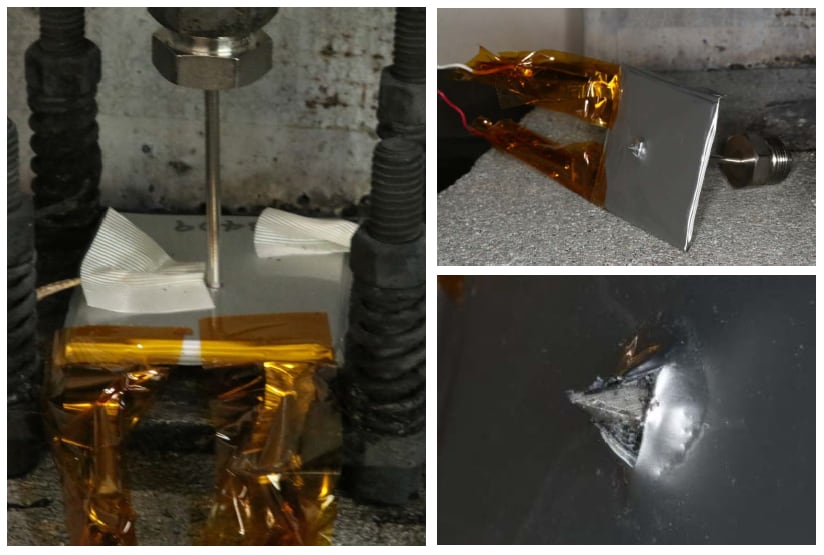 The cells were tested in accordance with section 4.7.4.4. of the MIL-PRF-32383 (Military Performance Specification), meaning they shall not burn or explode, and the external temperature of each test sample shall not be greater than 338 degrees Fahrenheit (170 degrees Celsius) when penetrated by sharp objects.

When conducting the test, a 0.113-inch diameter stainless steel nail is driven through a fully charged cell at a prescribed speed. The cell is deemed to have passed if there is no smoke or flame following the nail penetration.

Amprius’ innovative polymer electrolyte prevents the penetrating nail from creating a low resistance short circuit, as indicated by the minimal increase in the cell temperature after penetration and only a small decrease in cell voltage. After nail penetration the cell is still functioning and providing power, a critical capability for soldier wearable batteries.

“As we work toward higher production capacity, the successful passing of this nail penetration test is a significant step in the progression of our technology and product development,” said Dr. Ionel Stefan, CTO of Amprius. “We have a unique opportunity to provide a significant energy density performance increase of nearly 100% – doubling the run-time for all mobile-powered devices without increasing the overall weight of wearable batteries for our US Army soldiers.”

As part of that program, Amprius is building and testing cells for use within soldiers’ central power source, the Conformal Wearable Battery (CWB). The CWB integrates into a soldier’s vest and powers critical communications and navigation equipment.

A purchase order for thirty battery packs has been placed by the US Army for capability demonstration.