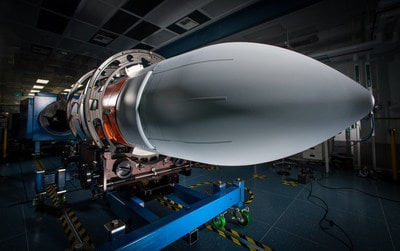 A 15-day test event took place in October, with U.S. Navy Sailors conducting maintenance procedures on an NGJ-MB engineering development model test pod, including the removal and reinstallation of components inside the pod based on previous training. The fleet maintainers also verified step-by-step procedures from the technical manuals, validated and tested new support equipment, and provided feedback to the team.

Danielle Raffa-Schubert, Supportability Test and Evaluation lead, who coordinated the logistics demo, said the purpose of the demo was to allow Sailors who had not seen the NGJ-MB pod to receive classroom training and then run through the procedures and manuals, while maintaining safety of the pod, aircraft and the people.

“There are always rumors about what the [NGJ] pod is and that it will be easier to work on than the ALQ-99 [Tactical Jamming System currently used by the fleet], but they are completely different,” said Aviation Electronics Technician 1st Class Larry Basham, Electronic Attack Weapons School, NAS Whidbey Island, Washington.

The NGJ-MB system, developed by Raytheon Intelligence and Space, is part of a larger NGJ system that will augment, and ultimately replace the legacy ALQ-99 currently used on the EA-18G Growler. NGJ-MB is an external jamming pod that will address advanced and emerging threats using the latest digital, software-based and Active Electronically Scanned Array technologies and will provide enhanced AEA capabilities to disrupt, deny and degrade enemy air defense and ground communication systems.