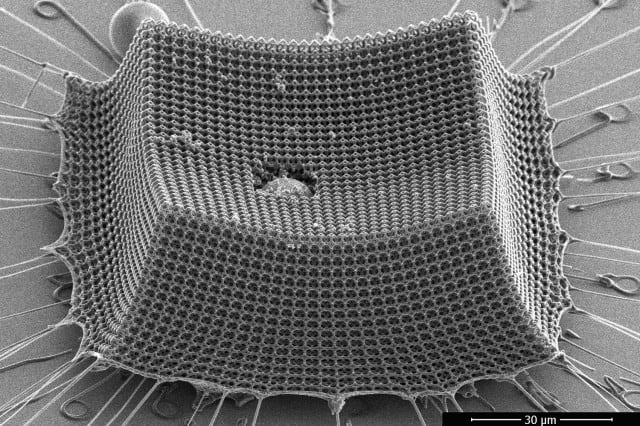 U.S. Army-funded research has identified a new material that may lead to lightweight armor, protective coatings, blast shields and other impact-resistant structures.

Researchers at the U.S. Army’s Institute for Soldier Nanotechnologies (ISN) at the Massachusetts Institute of Technology (MIT), Caltech and ETH Zürich found that materials formed from precisely patterned nanoscale trusses are tougher than Kevlar and steel.

The research found that the material prevented the projectiles from tearing through it. Therefore, this material, once scaled, could provide a means of developed lightweight, protective coverings, blast shields, and other impact-resistant materials and armors for various industries.

The material is less than a width of a human hair, but still able to prevent tiny, high-speed particles from penetrating it. According to researchers, when compared with steel, Kevlar, aluminum, and other impact-resistant materials of comparable weight, the new nanotech armor outperforms them all.

“The knowledge from this work […] could provide design principles for ultra-lightweight impact resistant materials [for use in] efficient armor materials, protective coatings, and blast-resistant shields desirable in defense and space applications,” said co-author Dr. Julia R. Greer, a professor of materials science, mechanics, and medical engineering at Caltech, whose lab fabricated the material.

The research team studied nanoarchitected materials undergoing fast deformation, such as that caused by high-velocity impacts. At Caltech, researchers first fabricated a repeating pattern known as a tetrakaidecahedron—a lattice configuration composed of microscopic struts—using two-photo lithography, a technique that uses a high-powered laser to solidify microscopic structures in photosensitive resin.

To test the tetrakaidecahedron’s resilience to extreme, rapid deformation, the team performed experiments at MIT using the ISN-developed laser-induced particle impact array. This device aims an ultrafast laser through a glass slide. As the laser passes through the slide, it generates a plasma, an immediate expansion of gas that launches the particles toward the target.

Using a high-speed camera, the researchers captured videos of the microparticles impacting the nanoarchitected material. They had fabricated material of two different densities. A comparison of the two materials’ impact response, found the denser one to be more resilient, and microparticles tended to embed in the material rather than tear through it.

To get a closer look, the researchers carefully sliced through the embedded microparticles and nanarchitectured target. They found that the struts below the embedded particle had crumpled and compacted in response to the impact, but the surrounding struts remained intact.

“We show the material can absorb a lot of energy because of this shock compaction mechanism of struts at the nanoscale, versus something that’s fully dense and monolithic, not nanoarchitected,” Portela said.

Going forward, Portela plans to explore various nanostructured configurations other than carbon, and ways to scale up the production of these nanostructures, all with the goal of designing tougher, lighter materials.