Manpack radios are communications systems that are compact and lightweight enough to be carried by a single operator, typically in a backpack. Military manpack radios are used by a wide range of forces and operators, including infantry, special forces, and naval and air force personnel.

Designed for use by dismounted troops, or to be mounted in vehicles or operations centers, manpack radios are intended to be portable and potentially carried for long periods of time, so they need to be SWaP (size, weight and power)-optimized and emit heat at a comfortable level.

Manpack radios may be designed to communication on frequencies such as HF (high frequency), VHF (very high frequency), and UHF (ultra-high frequency), and may also feature SATCOM (satellite communications) capabilities to allow BLOS (beyond line of sight) and global connectivity for over-the-horizon operations. They may also have built-in GPS or GNSS receivers. Backpack radio antennas are typically omnidirectional, and may include spring or gooseneck designs to minimize the risk of damage in the field.

Tactical manpack radios may be multi-channel to provide redundancy, and may be capable of simultaneously transmitting and receiving voice, data and video. As they are used in battlefield and contested environments, they will typically require encryption capabilities, allowing transmissions to not be intercepted by hostile forces, while still providing interoperability with NATO and allied forces.

Manpack radio systems may include swappable modules to provide additional functionality for SIGINT (signals intelligence) and ISR (intelligence, surveillance and reconnaissance) operations. They may also be built around software-defined radio (SDR) architecture, which allows reconfiguration without needing to replace any hardware. SDRs help future-proof the systems for future mission requirements, allowing easy application of upgrades such as new waveforms. 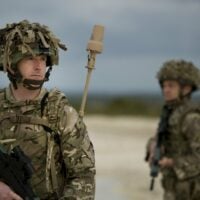