Military data storage systems include DAS (direct attached storage), NAS (network-attached storage), servers, and flash drives. They may be installed in fixed centers of operations as well as a wide variety of vehicle platforms such as manned and unmanned aircraft, naval vessels and armored vehicles. 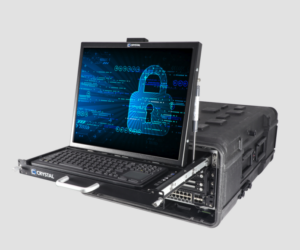 Rugged data storage at the tactical edge by Crystal Group

Military Data storage platforms may incorporate traditional hard drives, or solid-state drives that have the advantage of using no moving parts. They can come in a variety of form factors, including easily-removable rack-mount formats, and some may be designed for low-SWAP (size, weight and power) platforms such as drones and unmanned vehicles. They commonly use SATA or PCI Express interfaces for transferring data.

Many modern aerospace and defense applications involve large amounts of data from imaging and other sensors, and also require fast read and write speeds. Such applications include C5ISR (Command, Control, Computers, Communications, Cyber, Intelligence, Surveillance, and Reconnaissance), artificial intelligence (AI), and machine learning. In order to keep pace with these requirements and with the speed of modern processors, some data storage solutions incorporate NVMe (Non-Volatile Memory Express) technology. NVMe is a protocol that provides high throughput and low latency for Flash and SSDs (solid state drives).

Data storage solutions for military applications typically need to be equipped with cybersecurity, as they may be used to hold classified, secret or top-secret data. Secure data storage systems may include military-grade encryption, as well as anti-tampering capabilities that erase the data in case of unauthorized access.

Data storage systems for defense and aerospace environments are often ruggedized, with enhanced resistance against harsh environmental conditions such as moisture, sand and dust, extremes of temperature, shock and vibration, impact and gunfire, and electromagnetic interference (EMI). Systems intended for use in satellites and space vehicles may also need to be radiation-hardened. Standards that rugged data storage may be designed to meet or exceed include MIL-STD-810.