Military Ground Surveillance Radars (GSRs) detect and track land-based targets like people and vehicles. They are primarily deployed on the ground by land forces to secure territory. These radars may help protect fixed sites like airbases, logistics depots or headquarters.

Several radars may be deployed and networked with one another to provide coverage across large swathes of territory. Today’s GSRs are also capable of detecting and tracking ‘low and slow’ airborne targets like UAVs (unmanned aerial vehicles) and helicopters. The altitudes at which such aircraft fly can place them squarely within the radar’s field of view.

GSRs have several advantages compared to other forms of surveillance. They can be deployed day and night, and unlike optronics and human observers, they may not be adversely affected by bad weather or obscurants like smoke. GSRs can operate unattended for hours or days at a time, since unlike human observers, the radar will not suffer fatigue.

Ground-based surveillance radars are primarily used for short range detection. This is because the radar’s detection range is influenced by the height of its antenna. Much like human or optronic vision, the distance the radar can ‘see’ is directly proportionate to height. For example, a GSR with a nine foot (three-meter) antenna could detect a target at a range of four miles (seven kilometers). However, this can be contingent on the target’s size. For example, such a radar may be capable of detecting a truck at this range, but would struggle to detect a human given the latter’s comparatively small size. 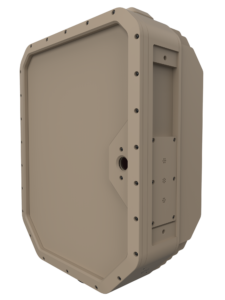 Another challenge for GSRs is dealing with clutter and false alarms. Ground surveillance radars may have to contend with buildings and foliage. These can obscure actual targets from the radar’s line-of-sight. Likewise, livestock or large animals can cause false alarms with a GSR mistakenly classifying them as a human.

As radars have advanced in sophistication, so radar signal processing software has evolved to counter these challenges. Today’s ground surveillance radars use sophisticated algorithms recognising and discounting clutter or false alarm targets with well over 90 percent accuracy. This level of sophistication is likely to grow in the future as cognitive radar techniques come to the fore. These incorporate Artificial Intelligence (AI) and Machine Learning (ML) approaches.

By using AI and ML, a radar’s software can ‘learn’ from the environments and scenarios in which they are deployed. For example, the radar can collect information on the radar signatures of trees and livestock when deployed. Over time, the radar will use this information to recognise these radar signatures and discount their associated targets. As AI and ML techniques improve so will the sophistication of these radars.

Ground surveillance radars were first used by the US Army during the United States’ involvement in the Vietnam War between 1965 and 1975. The force deployed its’ AN/PPS-4/5 radars. They protected installations like fire support bases. By today’s standards, these systems were simple. They relied on the Doppler effect to detect and track a moving target. The Doppler effect occurs when there is a slight change in frequency between a transmitted radar signal and that same signal when reflected by the target. A progressive increase in the frequency of the returned signal indicates the target is moving towards the radar and vice versa. Today, GSRs are standard equipment in militaries around the world and primarily deployed by land forces.