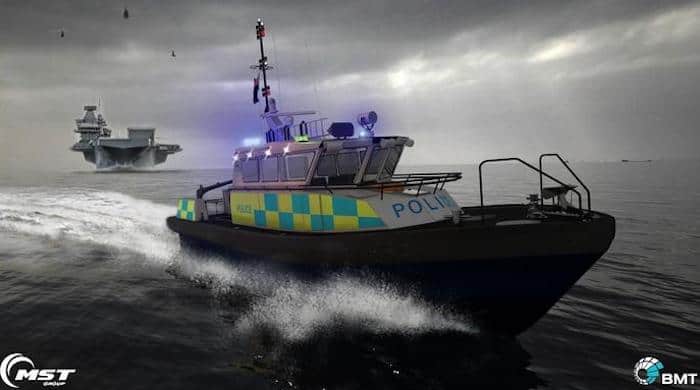 “This £36 million investment allows our MoD Police and Gibraltar Defence Police Forces to enhance the vital security service they provide to our military bases at home and overseas,” said Defence Minister Baroness Goldie.

“Designed and constructed by maritime experts in the U.K., this contract reaffirms our commitment to invest in homegrown industry knowledge and support the protection and creation of skilled jobs.”

The craft will replace the current 14.0m – 15.0m Police Patrol Launches currently in use by the MDP and GDP. Key roles will include protecting HM Naval Bases in the U.K. and Gibraltar, and undertaking high-profile armed patrolling of the U.K.’s borders.

The new design will join MST’s successful HPB series of enclosed patrol craft as the new HPB-1500 and has been jointly developed with BMT. This is the same partnership behind MST’s larger HPB-1900 design of which two are already in build for the Royal Navy Gibraltar Squadron.

The bridge will feature a fully integrated C4ISR and craft management system, utilising the latest open-architecture structure and state of the art shock mitigation crew seating.

“We are delighted to be working with DE&S again on another prestigious project supplying our UK Defence Forces,” said Benjamin Kerfoot, Managing Director, MST Group.

“This contract is another example of the success the MST Group has managed to achieve over the last two decades and is also a key indicator of the further accomplishments we will achieve in our near-future.”