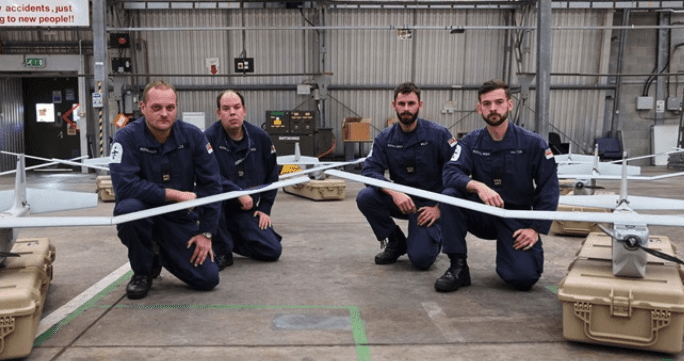 The Royal Navy has expanded its fleet of remotely-piloted drones with 12 new aircraft as well as new training and personnel.

The sailors at 700X Naval Air Squadron recently took delivery of the latest AeroVironment Puma Unmanned Aerial Systems and can now immediately deploy flights from any ship in the fleet.

The most recent deployment for the squadron, which is based at Royal Naval Air Station Culdrose in Cornwall, U.K., was on the offshore patrol vessel HMS Mersey.

“We’ve made a significant move forward in our capabilities in the last 12 months,” said Puma flight commander Lieutenant Ashley Loftus.

“We are now at the stage where we can be deployed at short notice. This is a totally organic and flexible Royal Navy enterprise, using our systems being flown by Royal Navy personnel.”

With a range beyond 10 miles and an endurance of more than two hours, the Puma can vastly increase the ability of a ship to gather intelligence.

Flying up to 45 miles per hour, the drones combine a high-tech control system with their array of sensors, including a times-fifty optical zoom, to live-stream video back to the ship.

“They may look simple, but the Puma is a rugged and sophisticated piece of kit. Yes, it’s fairly small, but that means we can deploy it from the stern of any ship with the minimum of effort,” Lieutenant Loftus added.

“Last year we took part in exercises in the Mediterranean on HMS Albion while this year we’ve deployed with HMS Tamar and then in the Baltic back onboard Albion again.

“We’ve also taken part in exercises with the Royal Marines. We’ve operated the Puma from landing craft while working with the marines in Scotland. We’d fly ahead of the craft, during the middle of the night, using one of the system’s thermal cameras to provide real-time intelligence.

700X Naval Air Squadron conducts its own training program to prepare personnel for the Puma flights. The squadron also teaches military personnel from across defense in the use of quadcopters. It also researches and evaluates a wide range of remotely-piloted systems as the sector continues to increase.