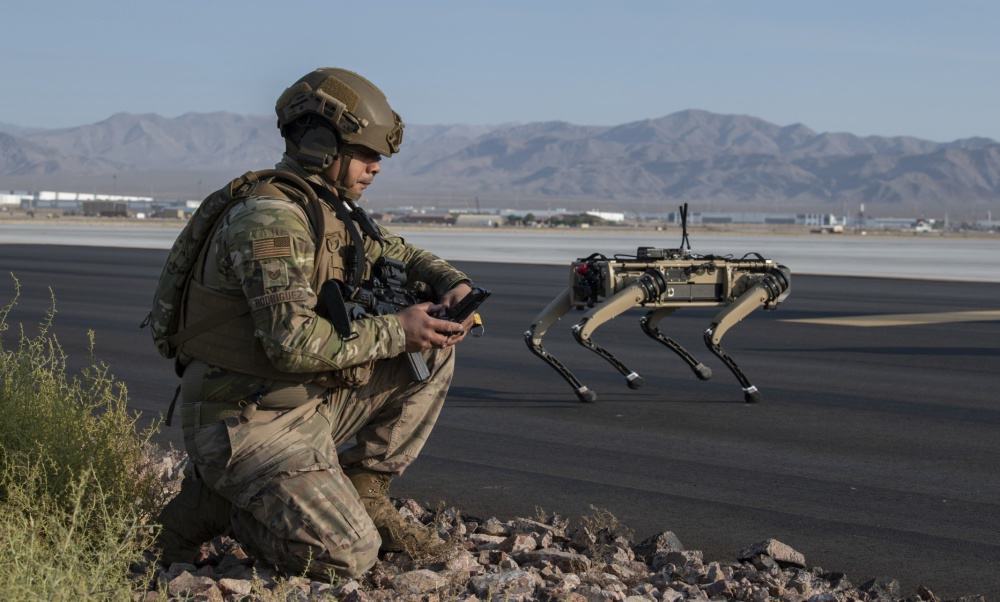 Teams within the Force Protection and Special Programs Divisions, both headquartered at Tyndall, supplied and integrated the 325th Security Forces Squadron with four prototype Quad-legged Unmanned Ground Vehicles, referred to as ‘robotic dogs,’ in March.

Designed by Ghost Robotics, these Vision 60 model robots are outfitted with 14 sensors and will be integrated with the Immersive Wisdom developed command and control software Vanguard, using semi-autonomous and user-operated modes to provide surveillance and perimeter security in difficult terrain or in harsh or unsafe conditions.

“The Air Force is really trying to look beyond traditional technologies and vendors in how we are satisfying our base protection requirements,” said Maj. Jareth Lamb, chief, Force Protection Modernization Branch. “This is just one of the ways we’ve been getting after innovation in the force protection space.”

The prototypes are equipped with advanced multi-directional, thermal, and infrared video capabilities, allowing for artificial intelligence-based threat detection. These technologies will allow them to make decisions based on changes in the environments, such as the presence of humans or perceived threats.

“People see these robots out walking around and they think this is a fieldable capability, but there is still a lot of development, testing and evaluation that still needs to be done,” said Johanna Lewis, program manager, Special Programs Division. “Having them just walk around is not what we’re after. We want them to patrol the base using their integrated sensors to provide our forces in the base security operations center with useful, mission-critical data.”

Lamb explains that despite the broad range of complex technology outfitted on the robots, the user interface is simple to operate:

“The command and control of these is actually pretty intuitive,” said Lamb. “They come with a control pad and joystick, so for anyone who’s ever played a video game before, you can easily pick it up and be able to control the full range of capabilities on these robots with minimal training.”

Two Hanscom teams are currently providing program management, engineering support, contracting, and test and evaluation support to help determine the full range of capabilities of the robots, as well as determining training requirements.

“It’s our responsibility to find out where the boundaries of these units are and if we can push those boundaries,” said Lewis. “We need to determine the full scope of how well they work, and how easy they are to maintain. These units at Tyndall are the first to be deployed and installed, so we have to do our due diligence and thoroughly test them.”

Testing of the prototypes at Tyndall will continue through fall 2021.