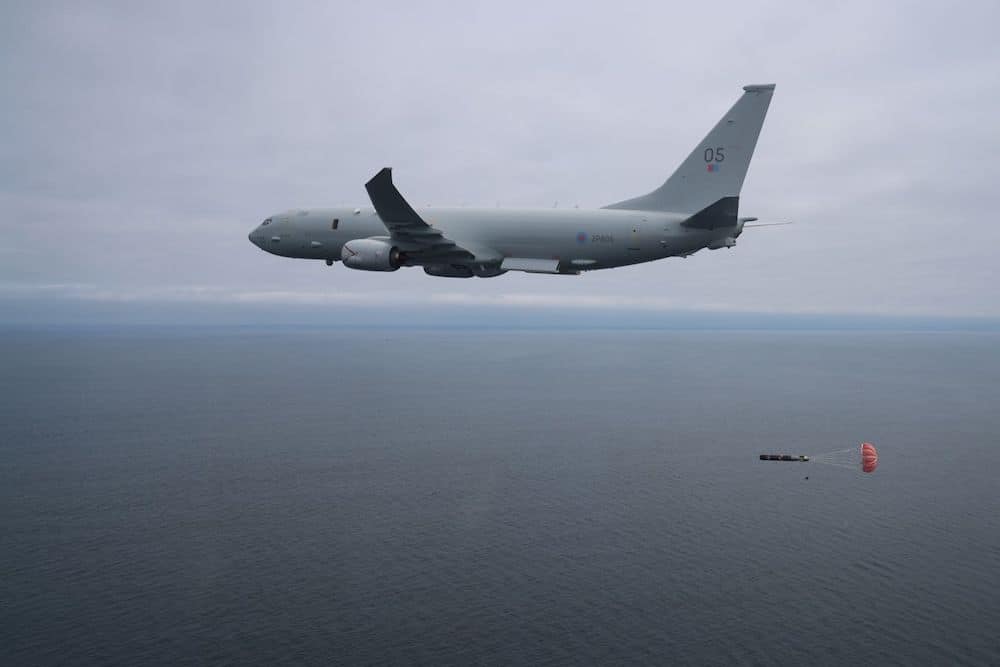 A Poseidon (P-8A) aircraft, operated by 120 Squadron based at RAF Lossiemouth, dropped a recoverable exercise variant of the Mark 54 Lightweight Torpedo to simulate an attack on a submarine in a training flight conducted over the Moray Firth, Scotland.

Working alongside the Royal Navy and close maritime allies such as the U.S. and Norway, Poseidon locates, identifies and tracks potentially hostile submarines operating around U.K. waters.

At just under 3m long and 32cm in diameter, the Mk 54 torpedo is small and light enough that the Poseidon aircraft can carry five in its internal weapons bay.

The high-explosive warheads on the live torpedoes are capable of destroying enemy submarines that the Poseidon crew can locate and track using state-of-the-art equipment.

The successful release of a torpedo is the latest milestone in the rapid development of the Poseidon in RAF service.

“It’s been a great privilege to witness the hard work of so many talented individuals across the Royal Air Force, civil service and industry partners come together to enable us to launch and recover this torpedo,” said Squadron Leader Dave Higgins, Torpedo Project Lead.

“This exercise has proved everything is in place for our weapon technicians to rapidly get these torpedoes onto our aircraft, so we can deliver them wherever and whenever they are needed.”

Five Poseidon MRA1s are based at RAF Lossiemouth with a further four set to be delivered by the end of this year.

The station, which is situated in close proximity to one of the aircraft’s most frequent area of operations, is benefiting from a multi-million pound investment program bringing significant economic benefits to the Highlands & Islands and Morayshire communities.

The Boeing Poseidon is fitted with advanced Anti-Submarine Warfare and Anti-Surface Warfare sensors which will provide global protection to U.K., NATO and its Allies’ submarines and warships.