HMS Audacious completed training exercises with NATO allies to test its ability to evade, track and engage foes underwater and on the surface News By DA Reporter / 22 Jun 2022 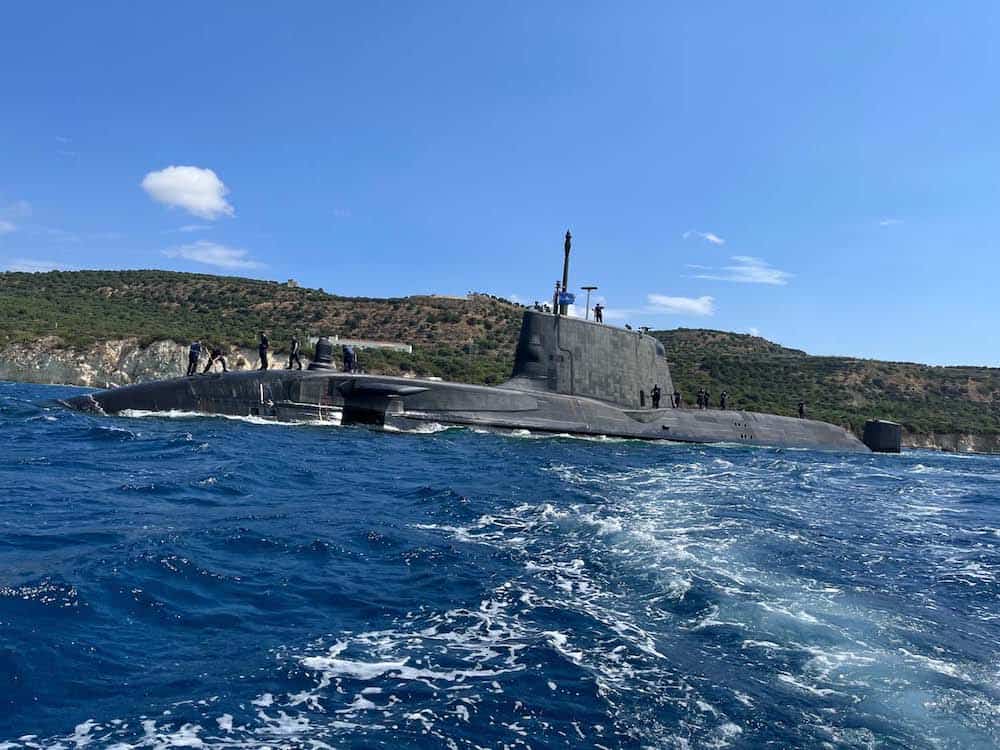 HMS Audacious in Crete during her first operational deployment

The Royal Navy’s newest and most advanced nuclear attack submarine carried out NATO security patrols in the Mediterranean on her maiden operational deployment.

HMS Audacious is the fourth of seven new cutting-edge £1.3 billion Astute-class submarines, which are the largest, most advanced and most powerful attack submarines ever operated by the Royal Navy.

The submarine joined HMS Astute, Ambush and Artful on the front line for the first time in January 2022 after formally being commissioned in September 2021, spending months in the depths of the North Atlantic and Mediterranean.

Audacious left Clyde Naval Base in Scotland and, after two months of intensive sea training designed to test the boat’s equipment and sailors to the limit, left the waters close to the UK bound south for the Mediterranean.

After loading Tomahawk missiles – just one part of the Astute-class’ powerful armory alongside the Spearfish heavyweight torpedo – in Gibraltar, Audacious sailed into the Mediterranean and completed exercises with NATO allies, including training with Greek, Turkish and United States allies.

The training tested Audacious’ ability to evade, track and engage foes underwater and on the surface, whilst offering NATO allies the chance to compete against a nuclear attack submarine.

“These exercises helped HMS Audacious to demonstrate her prowess as the newest, most capable nuclear-powered attack submarine (SSN) that the UK has to offer while also strengthening NATO capability and interoperability and demonstrating our resolve towards NATO Missions,” said Commanding Officer, Commander Jim Howard.

Audacious followed this up by carrying out a period of NATO operations to provide security to the region, something the Royal Navy regularly carries out alongside allies and partners.

Before this deployment into the Mediterranean, Audacious carried out essential training off the coast of Scotland, during which submariners were put through a range of mock crises on board, from fires to floods, to ensure they are ready to work together and respond calmly in a real emergency.

Final trials were completed, too, which thoroughly tested systems on the cutting-edge boat to make sure they will stand up to the stresses and strains of extended operations.

The Astute-class are capable of circumnavigating the globe while submerged, producing their own oxygen and drinking water to sustain the crews on arduous and lengthy deployments.

Audacious’ first deployment also marked the completion of qualifications for many crew members, which sees them learn the location and function of hundreds of valves aboard and ‘earn their dolphins’ to become fully-fledged submariners.

Fresh from her own deployment to the Arctic, in which she carried out a number of missions including sub-surface stealth raids with Royal Marines Commandos, sister submarine HMS Ambush joined Audacious as she prepared for full operations off the Scottish coast.

The two submarines went head-to-head in underwater battles, in a range of warfare scenarios, and training together.