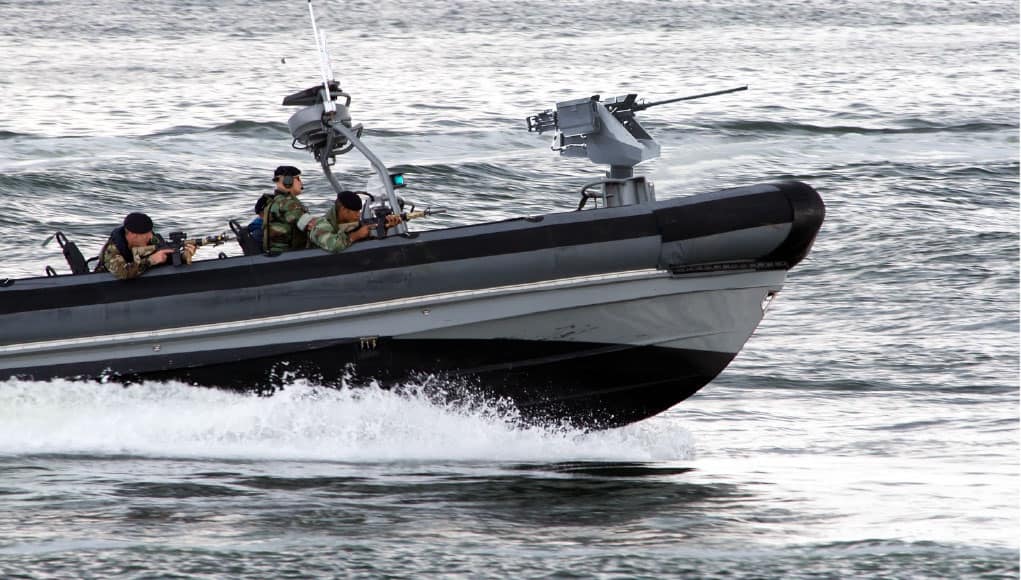 General Robotics has introduced SHARK, a new version of its Remote Controlled Weapon Station (RCWS) that addresses the need for Special Operations Forces (SOF) to operate their weapons on small boats.

These compact boats often move at high speed and agility. Yet, the constantly moving platform degrades fire accuracy with conventional weapon mounts, requiring operators to get dangerously close to the enemy to deliver the desired effects. Crews on larger boats often operate stabilized weapon stations to improve fire accuracy, but these systems can be to large and heavy for Rigid Hull Inflatable Boats (RHIBs). To meet this challenge, General Robotics developed SHARK for naval roles such as special operations to law enforcement interception, including interception, coastal security, counter-terror, and anti-piracy activities.

Addressing the most demanding needs of Naval Special Warfare (NSW), SHARK was designed and tested with users and experts from the local and international NSW community. SHARK fits on small manned and unmanned naval vessels, NSW boats, and raiding crafts to deliver versatile and accurate firepower.

“We designed SHARK to meet the specific requirements of naval commandos and SEALS,” Shahar Gal, General Robotics’ CEO, said. “We developed the SHARK prototype as a robust yet lightweight system offering seamless remote operation by a single operator with some special adaptations for naval use and NSW concepts of operation,” Gal said, adding that the prototype was further refined based on feedback from customers and partners following extensive field trials, further maturing SHARK for fielding.

SHARK is based on General Robotics’ combat-proven Pitbull RCWS. Small and light, with a netweight of 85 kg (without weapon and ammunition), SHARK is built as a rugged, robust, seaworthy system that is versatile enough to operate remotely on a cluttered deck. According to General Robotics, the SHARK system can score direct hits at a sea state up to three, where the platform and targets constantly move.

When the operator presses the trigger, the AI-driven fire control runs a target prediction algorithm to align the projectile’s path and the target’s expected location and points the weapon in that direction. Only then is a burst fired. According to the company, this technique has demonstrated hit accuracy of about 70%. This capability enables SHARK to be used as a naval Counter-UAS weapon, with the SHARK being mounted with an optional Anti-Drone Jammer used as a ‘soft kill’ Counter-UAS.

Weapon control is done locally or remotely through a touch screen tablet encased in a jacket providing the intuitive operating and safety buttons for the ‘Point & Shoot’ control. SHARK also features a rear camera that provides the operator with a point of view to assess the weapon status and overcome malfunctions associated with the ammunition, weapon, or mount.

SHARK is built for platform-independent operation; it maintains an autonomous situational awareness that includes built-in Anti-Collision functions and multiple Fire Inhibiting Zones (FIZ) and is integrated with other systems onboard. Optional integration with onboard radar enables SHARK to detect and alert hostile fires aimed at the unmanned platform and take responding measures accordingly.

The system’s Size, Weight, and Power (SWaP) enables the crew to maximize the effect of small caliber weapons such as the 40mm automatic grenade launchers, 0.5″ heavy machine guns, and 7.62mm light machine guns.

“At the bottom line, the reduced weight and size derive significant benefits,” said Gal, “It means SHARK can be mounted on smaller boats and handle the recoil loads with less weight and energy. As a result, SHARK consumes less power and delivers higher accelerations, resulting in better accuracy and agility. It can be used as a stand-alone system with its sensors or integrated with other sensors onboard. In this way, we offer tailor-made combat solutions to meet the unique requirements of our customers.”