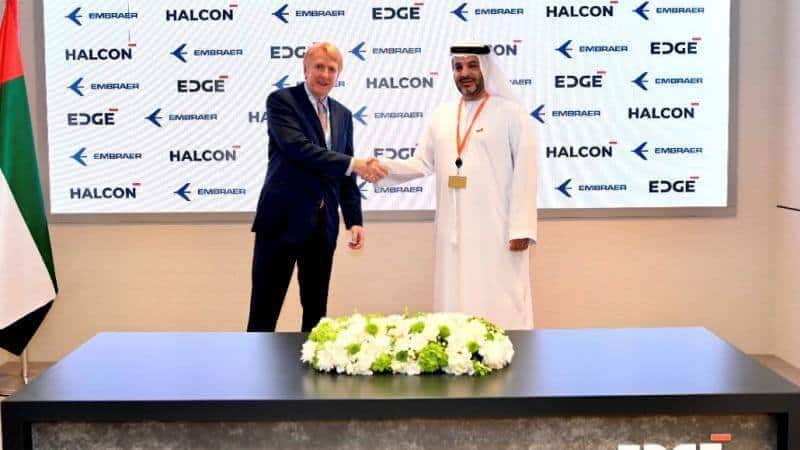 HALCON, part of the Missiles & Weapons cluster within EDGE Group, and Embraer are exploring opportunities to integrate HALCON weapon systems onto the Embraer A-29 Super Tucano aircraft.

Commenting on the collaboration, His Excellency Faisal Al Bannai, EDGE CEO and Managing Director, said, “This initiative marks another milestone for EDGE as we look to partner with leading companies globally and expand the reach and use of our products and services internationally. Embraer’s intention to work closely alongside HALCON in the development of weapon systems for the A-29 Super Tucano reflects the confidence placed in the UAE company’s ability to deliver on what has been agreed upon, and underlines HALCON’s position as a weapons manufacturer and supplier of choice internationally.”

Embraer Defense & Security, President and CEO, Jackson Schneider, added, “The A-29 Super Tucano is known worldwide by its capabilities in light-attack, training and Intelligence, Surveillance and Reconnaissance (ISR), and Embraer is glad to collaborate with the UAE-based EDGE Group in order to offer current and future A-29 operators even more operational precision and flexibility by means of the addition of HALCON weapon systems to the aircraft’s weapons portfolio.”

Saeed Al Mansoori, CEO of HALCON commented, “HALCON is an embodiment of EDGE’s and the UAE’s ambition to export knowledge and experience internationally, while forging strong partnerships and working with pace and agility. This initiative aims to cooperate with Embraer in a disruptive development case that we believe will drive significant benefits to both companies, and set a blueprint to further bilateral interactions for other EDGE entities.”

The A-29 Super Tucano is the golden standard counterinsurgency aircraft among national air forces around the world, having accumulated approximately 430,000 flight hours; nearing 60,000 combat hours, and with over 260 aircraft ordered. The combat aircraft was the first light attack plane to receive U.S. military certification back in September 2014.