The test flight proved XQ-58A’s extended capabilities by flying longer, higher, at a heavier mission weight, and at a longer range than the platform has previously been approved for and demonstrated kratos-defense-security-solutions News By DA Reporter / 09 Nov 2022 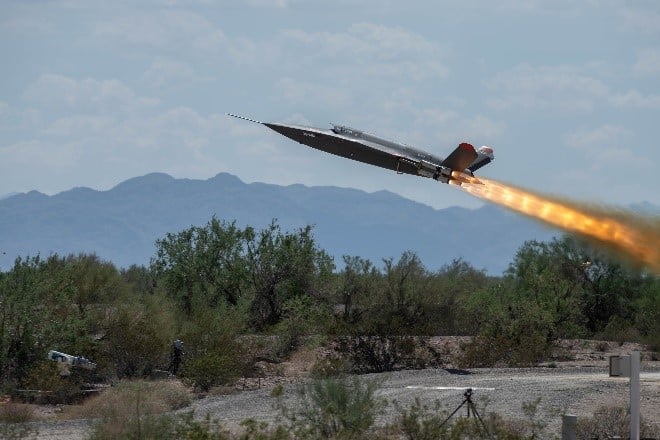 The test flight, performed at Yuma Proving Ground, proved XQ-58A’s extended capabilities by flying longer, higher, at a heavier mission weight, and at a longer range than the platform has previously been approved for (based on prior government range limitations) and demonstrated.

This flight was conducted with another of the Block 2 Valkyrie aircraft produced in the company-initiated 12-lot build and was the first flight for this tail number.

The flight was conducted with and demonstrated encrypted communications with redundant radios/communications packages for range and operational missions remote from government ranges.

For the final test point, the aircraft navigated to the landing site in a simulated loss of communications scenario. It landed within the target zone, demonstrating key autonomous capability for the end of mission phase of flight and recovery of the aircraft without RF comms. According to Kratos, this capability will help mitigate the possibility of enemy detection and tracking of RF comms emissions as the system returns to ‘base’.

“The Kratos/AFRL team is pushing the envelope in these truly uncharted waters, continuing to evolve the capability and drive affordability in the CCA class where mission capability and effectiveness is achieved through a combination of individual and distributed CCA capability plus mass of aircraft,” said Steve Fendley, President of Kratos Unmanned Systems Division. “Wargames and analyses consistently report that mass is the solution to enable winning in today’s conflict arena and that a lower count of exquisite systems consistently fails. Kratos is laser-focused on the disruptive, affordable (enabled by simple and elegant) solution set.”

The XQ-58A Valkyrie was initially developed in cooperation with AFRL on the Low Cost Attritable Strike Demonstrator (LCASD) Program with multiple follow-on programs and projects for several customers and applications.

These multiple program applications continue with the Block 2 Valkyrie Maturation Program and other programs related to production, specific mission applications, and operational development of the XQ-58A family of affordable, high-speed, tactical UAVs.

“While I appreciate the digital simulations and modeling we read about regularly, I am convinced that, much like how our target system aircraft support military training and weapons development with actual flights and shots, Kratos’ regular and envelope-pushing development flights and mission preparation flights are what will ultimately deter our enemies and enhance the readiness of our military,” said Eric DeMarco, President and CEO of Kratos Defense & Security Solutions. “The USAF/Kratos Made-in-America Valkyrie is the right system, at the right price, at the right time, and we stand ready with active production lines and a family of low cost, high performance, jet drone systems to provide affordable mass to the US and its Allies today. At Kratos, affordability is a technology. We are moving at the speed of relevance and are disrupting the existing defense procurement model by providing rapidly developed, innovative systems, rather than simply PowerPoints, renditions, or models with unknown ultimate cost, performance, and delivery dates to transform our country’s procurement model to address today’s real-world threats.”