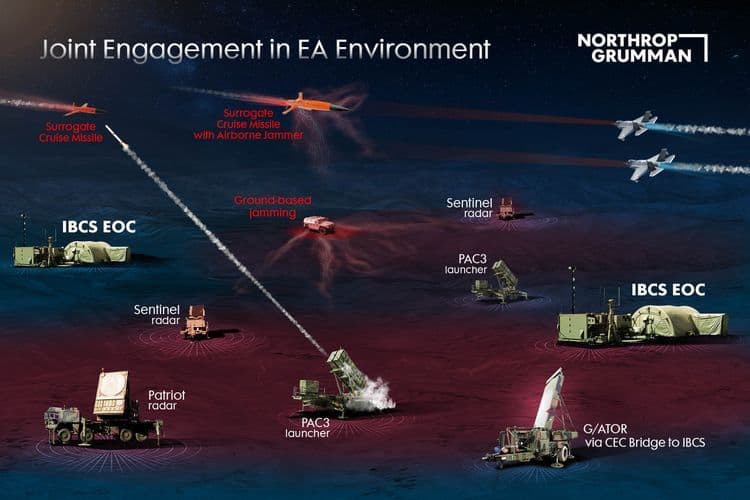 The flight test consisted of live testing and demonstration of a Joint Track Manager Capability (JTMC), which provided a bridge between IBCS and the Navy’s Cooperative Engagement Capability (CEC), enabling the sharing of G/ATOR track data on the IBCS Integrated Fire Control Network (IFCN).

Two surrogate cruise missiles were launched in the test, one performing the electronic attack mission to disrupt radar performance, and the other flying a threat profile targeting friendly assets. IBCS was used to track the surrogate cruise missile targets, identify the threatening missile, and launch a Patriot Advanced Capability-3 (PAC-3) interceptor.

With support from Lockheed Martin, the flight test architecture also incorporated two F-35 combat aircraft integrated on the IFCN with on board sensors contributing to the IBCS developed joint composite track used to perform the engagement.

“By enabling joint operation and utilizing multiple sensors operating in various bands, IBCS was able to operate through the electronic attack environment so soldiers can identify, track and ultimately intercept the threat.”

The flight test success integrated the widest variety of sensors to date on the IFCN for an IBCS test, including one Marine Corps G/ATOR, two Army Sentinel radars, one Army Patriot radar and two U.S. Air Force F-35 fighter aircraft.

This was the eighth of eight successful developmental or operational flight tests performed with the IBCS program.

Northrop Grumman is pioneering Joint All-Domain Command and Control (JADC2) with IBCS. The system’s resilient, open, modular, scalable architecture is foundational to deploying an integrated network of all available assets in the battlespace, regardless of source, service or domain.