The Portable Intermittent Fault Detector is an advanced diagnostic instrument that can detect and isolate mis-wiring problems in as short as 50 nanoseconds, and ensures the F-35 fighter jet is always mission-ready News By DA Editor / 08 Feb 2021 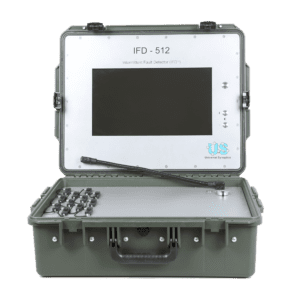 Universal Synaptics’ Portable Intermittent Fault Detector (PIFD) has been approved and authorized for use by all F-35 Joint Program Office (JPO) Program Management Offices and at all JPO-sponsored facilities.

The PIFD is a patented advanced diagnostic instrument that can simultaneously and continuously monitor all unit under test (UUT) circuits individually at the same time, detecting intermittent faults that occur, even as short as 50 nanoseconds (0.00000005 seconds) in duration.

“The most advanced weapon system requires the most advanced wiring diagnostic capability to ensure the F-35 is always mission-ready,” said Ken Anderson, president and CEO of Universal Synaptics. “The collaboration between the F-35 JPO, Lockheed Martin and Universal Synaptics continues as we work to reduce No Fault Found, improve readiness and reduce sustainment costs for the F-35.”