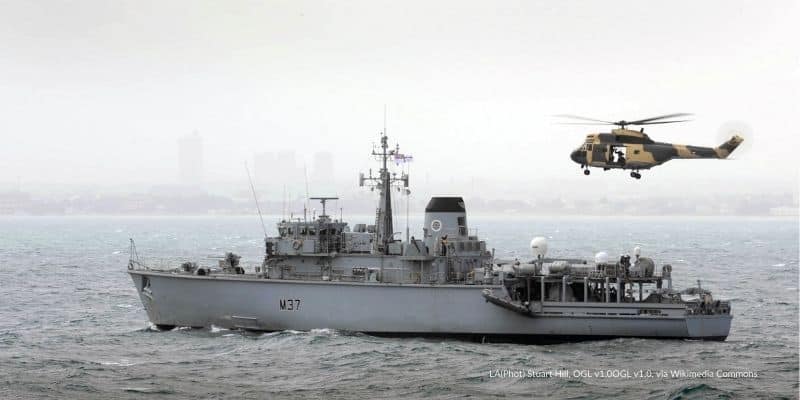 Cambridge Pixel has supplied its radar interface hardware, tracking, and distribution technology to Thales UK as part of a major investment by the Ministry of Defense (MoD) into enhancing the Royal Navy’s mine hunting Combat Management Systems (CMS) performance.

The Oceanographic Reconnaissance Combat Architecture (ORCA) Program was commissioned to allow the Royal Navy to continually upgrade its mine warfare command and control systems, ensuring its global leadership in mine countermeasures well into 2030s.

By switching to ‘plug and play’ open architecture, supported through life and integrated with other sensor suites, its vessels and crews will benefit from cutting-edge mine hunting capabilities.

Engineers at Thales needed to interface to existing Kelvin Hughes 1007 radars aboard its vessels for integration with its own multi-function consoles. Cambridge Pixel supplied its HPx-400e PCIe radar input cards to interface with the analog radar video signals from the 1007 radars, and the SPx Server application software to supply the Thales TACTICOS system with ASTERIX CAT-240 format radar video and NMEA format target track data.

The company’s SPx Server application is a Commercial-Off-The-Shelf (COTS) radar data extractor and target tracker. Interfacing to hardware or network radar video, SPx Server accepts polar format primary or Identification Friend or Foe (IFF) radar video and processes it to identify targets, which are then correlated from scan to scan to output positional and motion updates assisting with situational awareness.

A total of six Hunt class minesweeper ships and seven Sandown class minehunter ships will receive this upgrade. After an eight-month refit, HMS Pembroke is the first vessel in the Royal Navy to gain the brand-new ORCA Command System, having launched to the seas, mission-ready in April 2020.

“It has been a privilege to work on such a vital upgrade project, helping to maintain the U.K.’s mine countermeasure capability for years to come. Our solutions provide a straightforward upgrade path for integrators wishing to modernize and adopt open architectures,” said Rob Helliar, Head of Customer Solutions at Cambridge Pixel.

As part of Cambridge Pixel’s support of the ORCA program, its engineers provided training and on-site/on-ship consultation during the installation and commissioning of the first system on HMS Pembroke. Cambridge Pixel’s engineers continue to provide critical engineering support to the Thales team, as they roll out upgrades to the remaining vessels in the series.