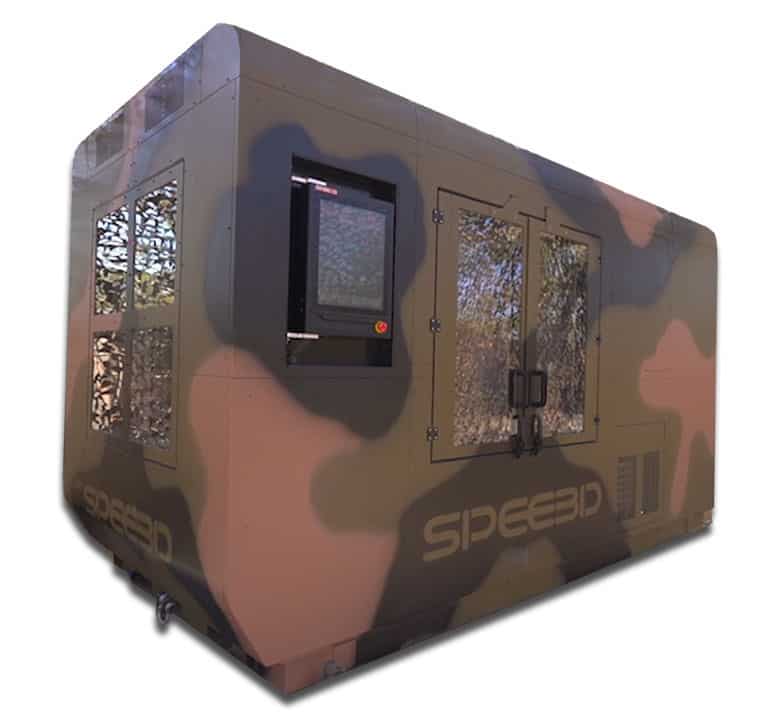 WarpSPEE3D Tactical, the technology used at Project Convergence in collaboration with the British Army

In collaboration with the British Army, SPEE3D demonstrated its WarpSPEE3D Printer at Project Convergence 2022, showcasing the benefits of Additive Manufacturing (AM) technology to the defense industry.

Due to the high-speed capabilities of SPEE3D’s technology, the British Army requested the company’s support to provide a cold spray metal manufacturing capability that could be used throughout the US Army Future Command’s Project Convergence as part of a concept assessment.

As one of the first additive manufacturing companies to partner with the British Army, together the organizations showcased the WarpSPEE3D printer’s deployable technology to print metal 3D printed parts in the field and in various conditions throughout the exercise.

“We are thrilled to be invited by the British Army to collaborate and explore the capabilities and logistical impact of our additive manufacturing technology for the military,” said Byron Kennedy, Co-Founder, and CEO of SPEE3D. “Our partnership over the last two years with them has validated the need for 3D metal printing to solve a myriad of challenges the military faces, and in rough terrain where they need a deployable and easy-to-use solution to print important parts quickly.”

“SPEE3D regularly works with defense worldwide to showcase their innovative additive manufacturing technologies to help solve some of the military’s most pressing supply chain issues,” said the British Army’s Lieutenant Colonel Davidson Reith. “It’s our pleasure to be able to work with SPEE3D, giving the British Army the opportunity to learn lessons from a world-leading additive manufacturing company.”

While at Project Convergence, WarpSPEE3D generated parts successfully in the harsh, desert conditions at Fort Irwin, demonstrating the robust, expeditionary capabilities of its technology, and how metal 3D printing can leverage supply chain readiness for defense.

SPEE3D and the British Army collaborated on creating dozens of applications for various armored vehicles over the campaign’s two weeks. With such a quick turnaround time, the ability to produce replacement parts in hours can significantly help improve vehicle readiness when needed for soldiers while on the front line.

Some parts the SPEE3D and British Army team printed include:

This collaboration with the British Army is an example of SPEE3D’s on-going and advanced manufacturing work with global Defense Forces. SPEE3D’s process operates with compressed air and electricity, and so does not rely on helium or other gasses, unlike other large additive manufacturing printers. With the release of the Phaser Nozzle announced earlier this year, SPEE3D’s process can currently produce parts from over 12 material sets, including copper, stainless steel, titanium, high-strength aluminum, and nickel-based carbides, with more in development.