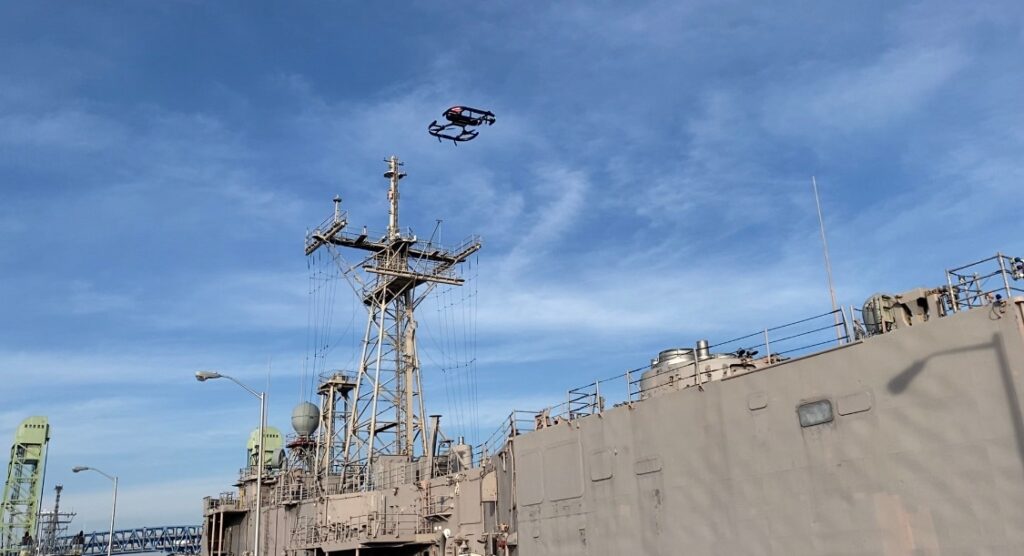 The following article from the Naval Surface Warfare Center explains how the US Navy is testing new applications for Light Detection And Ranging (LiDAR) and 3D ship models for assessing battle damage aboard a decommissioned naval frigate.

Between a recent static detonation and an upcoming test evolution, a decommissioned frigate is taking hits to help the Navy test a new use for lidar scanning and 3D ship models—assessing battle damage.

The static detonation training event in late March, in which an explosive charge was placed aboard the ship for the purpose of damaging it, and the upcoming evolution are critical pieces of a lidar-focused megaproject funded by the Naval Innovative Science and Engineering (NISE) program. As part of the project, multiple warfare centers are working together to build 3D models of entire ships from lidar scans, aiming to expand the use of those models to battle damage assessment and repair as well as to installation and modernization, and other fleet applications.

“These training events with the decommissioned ship are really great opportunities for the lidar megaproject,” said Patrick Violante, team lead for the Advanced Data Acquisition, Prototyping Technologies and Virtual Environments Lab at Naval Surface Warfare Center (NSWC), Philadelphia Division (PD), one of the megaproject partners. “We want to show that we can quickly capture the damage, overlay it on the baseline model, document the condition accurately and then share the data with the larger community to make engineering decisions.”

The effort comes at a time of increased options and affordability for lidar scanning tools. By harnessing the technology to build more 3D ship models, the lidar megaproject partners aim to reduce the need for engineering teams to travel to ships, enable more remote support such as virtual ship checks, and shorten response times to casualties and maintenance issues the fleet experiences at sea.

“You can’t send the ship to people, but you can send the 3D model to people,” said Ken Nahshon, a research engineer who focuses on ship damage from weapons effects at NSWC Carderock Division (CD) in West Bethesda, Maryland, another megaproject partner.

Lidar, short for light detection and ranging, scans an object in three dimensions by bouncing laser beams off of it and measuring how long they take to return. The technology can capture a vast network, or cloud, of data points and stitch together scans from different perspectives to create a millimeter-accurate 3D digital representation of the object. The latest lidar scanning tools can also take photos and overlay them on the data point cloud for a more realistic-looking model.

These lidar-generated 3D models have become a priority for the Navy fleet. Last year, Program Executive Office Integrated Warfare Systems issued a memo directing installation and modernization teams to perform lidar scans, when the technology is available, of areas they work on aboard Navy ships.

“The program offices are actually asking for lidar scans now, which is really important,” said Jason Bickford, research manager at NSWC Port Hueneme Division (PHD), another megaproject partner. “Tech transition to support the fleet has to be our top priority. We can play with technology all day, but unless we can align technology to a fleet gap or program office requirements, it’s very difficult to have impact with our research; it’s just play.”

To that end, NSWC PHD, NSWC PD and NSWC CD have secured NISE funds for a cross-warfare center collaboration known as a megaproject.

“These are the bigger, bolder projects that need headquarters’ endorsement and support, and that one warfare center might not be able to take on by itself,” Bickford said.

For several years, NSWC PHD has been brainstorming with other In-Service Engineering Agent of the Future campaign partners—including Violante at NSWC PD and Ray Provost, project manager for the Reverse Engineering, Science & Technology for Obsolescence, Restoration and Evaluation Lab, known as the RESTORE Lab, at Naval Information Warfare Center (NIWC) Pacific in San Diego—about the potential for lidar scanning to streamline their installation and modernization work.

For example, more accurate installation drawings could help avoid unforeseen obstacles and delays during ship work. Lidar scans can produce 3D models of ships that are accurate to a millimeter. Installation and modernization teams can use those models to measure areas of the ship before going aboard to install equipment.

“In that (digital) environment, we can take precise measurements between components; we can figure out distances between bulkheads and equipment; we can make sure doors and cabinets can open properly,” Bickford said. “We’re looking for things that might be in the way of our installation, that we need to move or plan around.”

Because different warfare centers work on different areas of a ship, Violante and Bickford saw a need for scanning the whole vessel rather than just specific areas. They began strategizing on how to build a collective of stakeholders from all warfare centers that would combine their efforts.

“Rather than Port Hueneme Division just scanning radar spaces and combat spaces, then Philadelphia scanning hull, mechanical and electrical spaces, what if we scan the ship in its entirety?” Bickford said. “We could merge our data sets for a bigger, more accurate, more comprehensive ship-level model. That was the original pitch.”

In 2020, that pitch went into practice as NSWC PHD worked with NIWC Pacific to lidar-scan the entire interior and exterior of USS San Diego (LPD 22), an amphibious transport dock. The result was the first full-ship 3D digital model of an LPD-class vessel.

Scanning an entire ship may seem costly due to the extensive data capture and analysis involved. For example, the team that scanned USS San Diego captured more than 7,000 individual scans from different positions in and around the massive vessel over the course of nearly two months. But Bickford said that ship-level scans are a worthy investment considering the potential to boost efficiency and eliminate costly mistakes.

“When you’re looking at an overhaul that will cost the Navy millions of dollars, (the cost of lidar scanning is) pennies given you’re improving the installation planning and timelines, resolving possible issues, and ensuring that the ship gets out of the shipyard faster,” he said. “There’s a huge return on investment.”

The value of full-ship scanning increases further by broadening its use among different warfare centers. In other words, the more stakeholders who use the data set, the lower the cost per user.

Although Violante and Bickford were initially focused on the role of lidar scanning in installation and modernization, they eventually found other potential uses and communities that could benefit from the ship-level 3D models, such as damage assessment.

If a Navy ship sustains damage in an engagement, Naval Sea Systems Command is typically responsible for engineering assessments to determine whether the vessel should return home or stay in the fight. Historically, this requires people to travel to the ship to inspect the damage, take photos and write a report. To respond to casualties more efficiently and accurately, Nahshon saw potential in using a “healthy” pre-casualty 3D model of a ship to compare to its damaged condition.

Nahshon envisioned using unmanned aircraft systems (UAS), also known as drones, that are already in theater to capture photos and video of damaged areas on ships. In a type of 3D scanning known as photogrammetry, the footage from a UAS could be stitched together to build a 3D representation of the damaged area. This new model could then be compared to the pre-casualty healthy model from the lidar scan for a more precise assessment of the damage.

First, the megaproject partners built a pre-casualty baseline model of the frigate. At a shipyard in Philadelphia in mid-February, personnel from NSWC PHD, NSWC PD and NIWC Pacific scanned the ship with a tripod-mounted 3D laser scanner.

The resulting model is a highly accurate and up-to-date representation of the inactive frigate, inside and out. After the ship sustains damage in the upcoming test evolution, a drone and manned aerial platforms will take photos to build a post-casualty model. Then a team at NIWC Pacific will overlay the post-casualty model on the pre-casualty model for the purpose of damage assessment.

“If successful, this will both demonstrate the value of 3D scanning technology for battle damage assessment and repair, and assess the ability for operational UAS assets already in theater to fill the critical scanning role,” Bickford said.

Another similar static detonation and subsequent test evolution, these on a decommissioned amphibious transport dock, are slated to take place this summer in Hawaii as part of Exercise Rim of the Pacific 2022. Provost said that a team would travel to Hawaii in advance to scan the ship and build a pre-casualty 3D model. As with the decommissioned frigate, the team will compare post-casualty scans of the amphibious transport dock to the healthy model to assess the structural impact.

Beyond the efforts around the static detonations and test evolutions, lidar megaproject partners meet every two weeks, and they held a workshop last fall to discuss standards for scanning, data storage, file formats, classification and other key topics.

“One of the questions we’re working through is ‘What’s the best tool for the job?’” Violante said. “There are multiple types of lidar technology, from drones to tripod-based scanning. We’re looking at how to choose the right tool based on the scenario or the size of the space.”

Nahshon said that with so many applications for lidar and so many people throughout the Navy interested in using it, the megaproject is bringing cohesion and avoiding duplication of efforts.

“Lidar is an enabling technology, and there are a lot of people working with it at different warfare centers,” Nahshon said. “Now we’re all connected, and it’s great.”