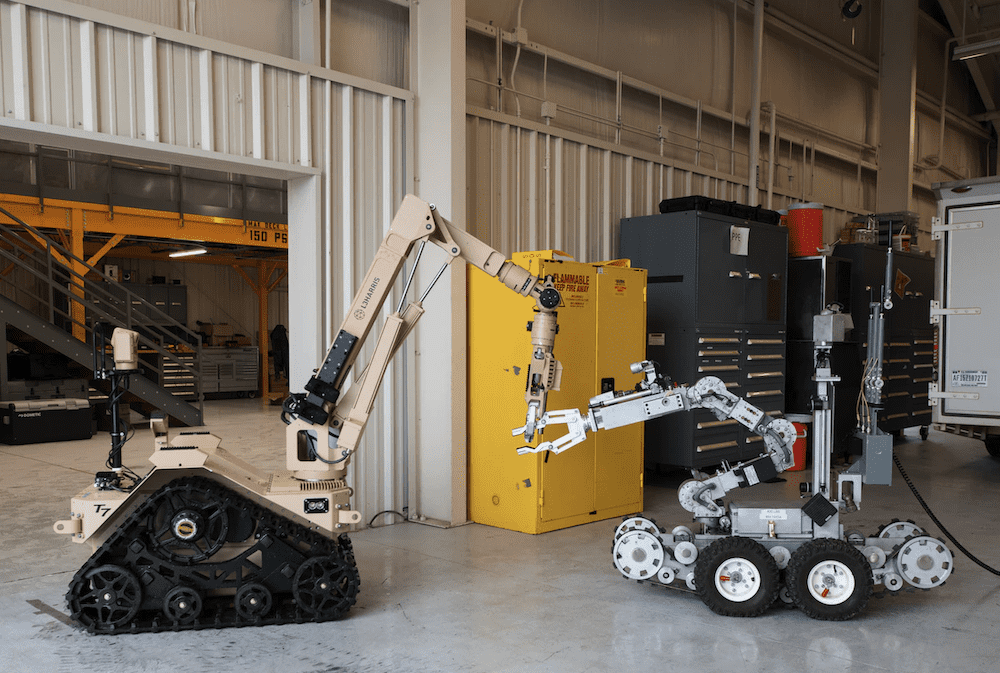 The T7, Air Force EOD’s newest robot, greets the F6A, the robot it will replace, at Eglin Air Force Base, Florida. Credit: US Air Force

Built by L3Harris Technologies, T7 is designed to replace the 20-year-old F6A system, featuring upgrades in both size and capability.

With all of its new features, T7 allows Air Force EOD operators to handle larger hazardous devices in less time, which ultimately improves the safety of EOD Airmen.

Eglin’s EOD flight, along with the 1st Special Operations Wing at Hurlburt Field, were the first to receive the T7 and begin training with it. L3Harris conducted a combined training course for both flights on the new robot with classroom and hands-on instruction.

In attendance was Senior Airman Christopher Roy, 96th Civil Engineer Squadron, who was also on the initial selection team that ultimately recommended the T7 as the next EOD robot. He said he was excited to finally have the new equipment in his shop and to use in the field.

“When applied to the EOD mission set, the T7 made the most sense,” said Roy. “The lift capability and cameras really set it apart. It operates smoothly as a whole, so its very user friendly. With its ease of use and with the training course complete, the EOD unit could take the T7 out on a mission right away if called upon.”

According to Dennis Carson, the EOD logistics program manager at the Air Force Civil Engineer Center, nearly every feature of the T7 greatly improved on the capabilities of the F6A:

Senior Airman Shae Barnard, 96th CES, who also completed the training course, said the new features make the T7 much more intuitive and ultimately safer: “It combines the capabilities of a lot of the various robots we have into one usable platform. In situations we deploy our robots into, we want to interrupt our environment as little as possible while trying to achieve the objective. When you have a robot this well designed and capable, it makes our job easier and safer.”

The Air Force purchased 170 T7 robotic systems for its EOD units across the globe at a cost of around $75 million. Eglin’s new robot marked the first of the T7s being delivered to EOD Airmen for field use.