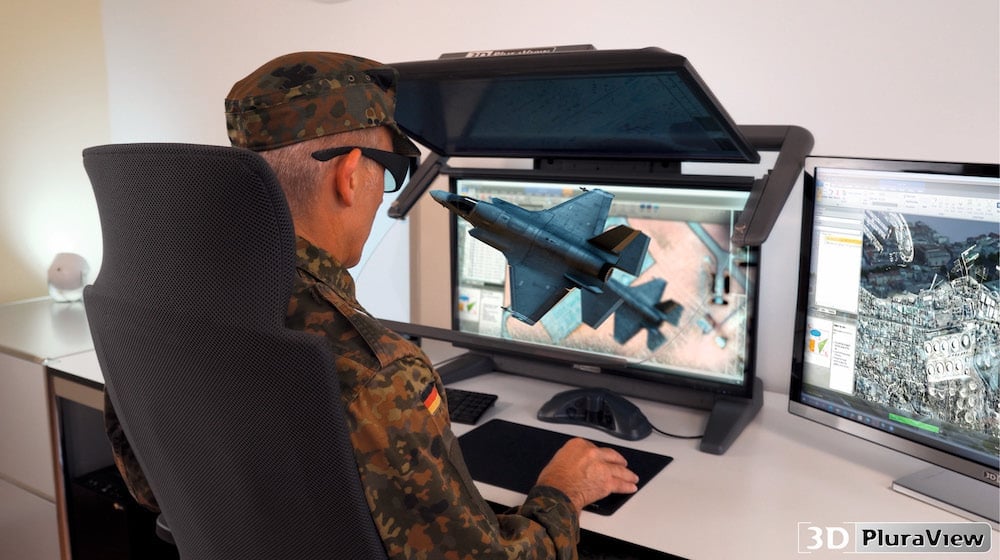 Schneider Digital is one of the few manufacturers worldwide for future-proof, stereoscopic desktop and large-scale projection systems, manufacturing and professional workstations and servers. All workplace components, i.e. workstations, stereoscopic desktop and large-format 3D stereo visualization solutions, can be shielded or ‘zoned’ to reduce or eliminate any electromagnetic emissions, according to the NATO SDIP-27 standard (Level A, B and C).

Available as complete workplace solutions from Schneider Digital (monitor + workstation + input devices), they can be shielded and zoned according to the NATO SDIP-27 standard. The initial SDIP-27 shielding level (Level C) for the 3D PluraView monitors can be executed with minimal effort and cost involved.

Armed forces worldwide use digital, 3D stereoscopic monitors for visual interpretation tasks. Stereoscopic image analysis is a key technology, as it provides access to image content that can be interpreted much better than monoscopic, single-image coverage from the same source and resolution.

In the context of military geo-information applications, the latest generation stereo display technology for the desktop is based on passive, dual-screen systems. These are predominantly used for photogrammetry and GIS/mapping, satellite imaging, UXO identification, operations planning and airspace coordination.

With a resolution of up to 4K per screen, the dual-screen 3D PluraView monitors are directly compatible with most stereoscopic software applications, i.e. no middleware, special graphic drivers or stereo signal emitters are required. Stereoscopic images are viewed on the 3D PluraView through very light-weight, passive and cross-polarized glasses.

The left image is displayed on the vertical monitor, the right image is electronically mirrored, displayed on the upper monitor and viewed through a so-called ‘beamsplitter’ mirror, creating a holographic object effect in 3D space.

The additive combination of the two screens results in a very bright stereoscopic visualization which, in contrast to active LCD shutter glasses, allows for permanent use in normal daylight office or lab environments. With two screens, the full monitor resolution of up to 4K (UHD) is achieved for each stereo channel and therefore each eye.

Designed and built by Schneider Digital to be extremely rigid and stable,  3D PluraView stereo monitors use solid-metal CNC-machined precision components made of steel or aluminum. This construction allows for the precise, long-term calibration and co-registration of the two monitors, providing optimal stereo image quality, which is especially important for military applications.

The electronic components used in the 3D PluraView have very low electromagnetic emissions and have been certified by:

Highest resolution – from Full HD to 2.5K (WQHD) up to 4K / 10 Bit (UHD) per monitor and stereo channel for extremely sharp, bright and high-contrast image display.

Suitable for normal office daylight environments – no dark-phase 120Hz switching, maximum brightness and full resolution, as separate monitors are used for each stereo channel / each eye.

Certified zoning available – according to NATO SDIP-27 standard (Level A, B, and C).

While there is certainly not a single “ideal” stereoscopic or holographic 3D display that meets all requirements, purposes and wishes, passive stereo display technology with two individual screens has been established on the market for 16 years, available continuously.

With its 3D PluraView monitor series, Schneider-Digital is established as the de-facto standard in the military sector and is by far the market leader for military 3D-stereo desktop displays.

Together with the 3D PluraView display systems, stereoscopic software packages, such as Socet GXP, GeoMaker and Sci-X can provide their full potential to military users for stereoscopic display, data capture and editing operations. This perfect hardware/software match also applies to the new generation of mesh-based 3D-reality modeling applications, for instance nFrames SURE.

With the new versions of ArcGIS Pro, the US-company Esri, the world leader for Geographic Information Systems, has created a universal stereoscopic software platform. ArcGIS Pro automatically displays stereo images or video from satellites, aircraft or drones together with all other 3D content, such as LIDAR, CAD & mesh datasets on connected 3D display hardware. This application is an excellent example for a comprehensive and intuitive integration of multi-source 3D datasets in a unified stereoscopic data environment on the 3D PluraView monitors by Schneider Digital.

3D PluraView stereo monitors are certified for use with: