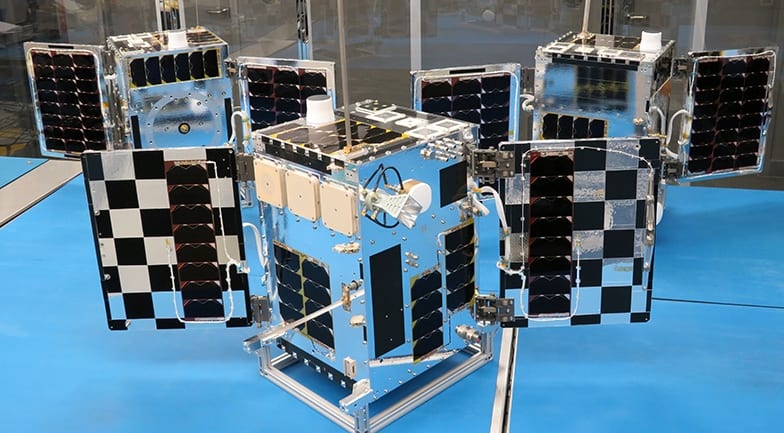 The second cluster of satellites scheduled to launch on a SpaceX Falcon 9 as part of Spaceflight Inc.’s SXRS-3 ride share mission has shipped to the launch site at Cape Canaveral, Florida. The Cluster 2 is the first of a series of next generation satellites HawkEye 360 Inc. is deploying to complete its baseline constellation.

“The upcoming launch of HawkEye Cluster 2 firmly establishes HawkEye 360 as the most advanced provider of RF geoanalytics,” said John Serafini, CEO. “These new satellites continue to push the boundaries of commercial RF sensing. Cluster 2 has up to ten times the collection capacity of our current cluster and improved geolocation accuracy. Our customers are asking for more data over more regions, so these next generation satellites are critical to supplying our customers with relevant and timely RF geospatial intelligence for national security, maritime domain awareness, environmental protection, and countless other applications.”

This shipment milestone means that Cluster 2 will soon be joining the company’s Cluster 1 satellites in orbit. The three Cluster 2 satellites are larger and more powerful, able to collect multiple types of signals simultaneously for longer periods of time. These workhorse satellites will allow HawkEye 360 to offer increasingly robust space-based RF data insights to its US government, international government, and commercial customers across a wide range of frequencies.

Each Cluster 2 satellite contains a customized RF payload developed by HawkEye 360. The satellite buses were manufactured by UTIAS Space Flight Laboratory. Beyond Cluster 2, HawkEye 360 is fully financed for the launch of fifteen more satellites in 2021 and early 2022.

HawkEye 360 is completing development of satellites for Clusters 3 and 4, anticipating launch in the middle of 2021. Clusters 5, 6, and 7 are in development with anticipated launch over the next 18 months. The average global revisit rate will be less than an hour.