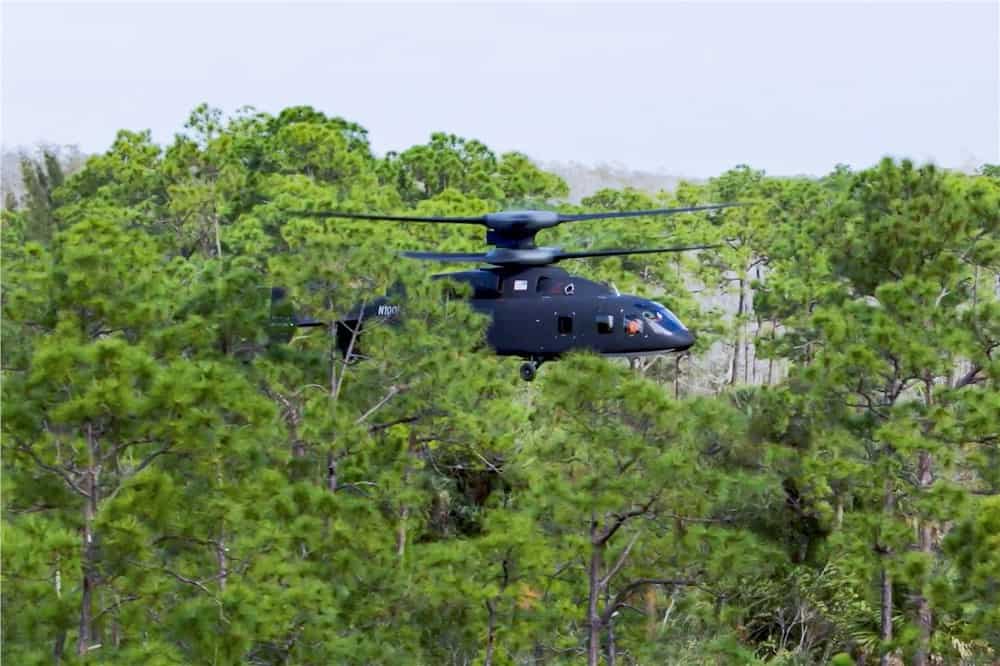 These flights validated the relevancy of DEFIANT to the FLRAA mission, and demonstrated how DEFIANT will help to increase survivability while reducing pilot workload.

“We fully demonstrated DEFIANT’s ability to execute the FLRAA mission profile by flying 236 knots in level flight, then reducing thrust on the propulsor to rapidly decelerate as we approached the confined, and unimproved, landing zone,” said Bill Fell, DEFIANT chief flight test pilot at Sikorsky and a retired U.S. Army Master aviator. “This type of level body deceleration allowed us to maintain situational awareness and view the landing zone throughout the approach and landing without the typical nose-up helicopter deceleration. This confined area was extremely tight, requiring us to delay descent until nearly over the landing spot, followed by a near-vertical drop. We landed DEFIANT precisely on the objective with little effort as we descended into this narrow hole while maintaining clearance on all sides.”

SB>1 DEFIANT is the technology demonstrator proving out transformational capabilities for the DEFIANT X weapon system, the Sikorsky-Boeing team’s offering for the FLRAA competition as part of the Army’s Future Vertical Lift program.

DEFIANT X will enable crews to fly low and fast through complex terrain. It will extend capabilities of Army Aviation on the modern battlefield – and is designed to fit in the same footprint as a BLACK HAWK. With DEFIANT X, the U.S. Army will deliver troops and cargo in future combat at twice the range of the current fleet.

“It’s what we call building combat power rapidly, and aircraft like the DEFIANT X can do that,” said Tony Crutchfield, retired U.S. Army Lieutenant General and now vice president of Army Systems at Boeing. “In the Pacific, it’s even more important because your lines of operation are going to be dispersed over a wide area; you’re going to have these small bases and supply lines that’ll be positioned either on ships or on islands. You’re going to want to move more assets, maneuver in confined terrain and survive to build that combat power faster than your adversary can – so you can win.”

DEFIANT X incorporates Sikorsky X2 Technology to operate at high speeds while maintaining low-speed handling qualities. This critical capability provides pilots with increased maneuverability and survivability in high-threat environments, allowing them to penetrate enemy defenses while reducing exposure to enemy fire. DEFIANT X’s X2 coaxial rotor system and pusher prop allows for a high degree of maneuverability in and around the objective which is also directly linked to survivability.