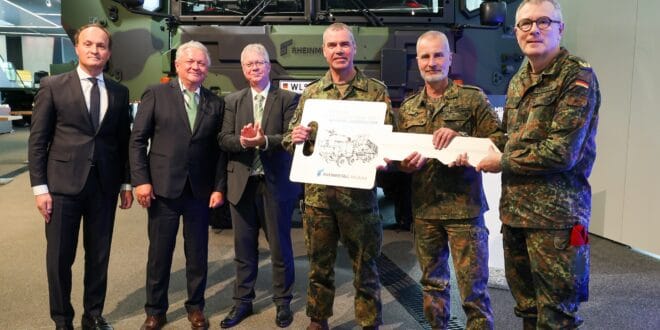 Rheinmetall MAN Military Vehicles GmbH (RMMV) has officially handed over the key for the next generation of palletized load-handling system to the German Armed Forces at a ceremony in Munich. The company also celebrated the delivery of the 3,000th Unprotected Transport Vehicle (UTF).

Known in German as Wechselladersysteme (WLS), these palletized load-handling systems are mounted on RMMV’s successful family of HX military trucks ensuring high commonality to the already fielded UTFs. The prime feature of the WLS is the hook loader, developed by the Hiab company. This means that the flatracks in use with the Bundeswehr can be picked up and set down on almost any terrain without the need for additional handling equipment. Alternatively, the vehicles can also transport an interchangeable flatbed or a container via the standardized 20-foot ISO interfaces.

A large share of the Bundeswehr’s WLS trucks feature a protected cabin. The protected WLS will substantially enhance the survivability, sustainment capability and tactical flexibility of the logistic formations of the German Federal Armed Forces.

The WLS is a critically important component of NATO’s Very High Joint Readiness Task Force VJTF 2023, which the Bundeswehr will be furnishing. In March of this year, instruction began for military drivers in the first protected WLS.

“The UTF is a showpiece project that paved the way for new procurement methods,” said Michael Wittlinger. “It was the first large-volume flexible framework agreement. Financed by the German government’s pandemic recovery package, additional vehicles were called-off and delivered. By the beginning of May, 3,000 vehicles had been transferred to the customer – almost a thousand more than envisaged in the original framework agreement for delivery by 2024. RMMV is therefore well ahead of schedule in this project.”

Armin Papperger, Chairman of the Executive Board of Rheinmetall AG, also emphasized the high importance of the WLS and UTF for the company in his speech at the handover ceremony: “Both projects from the field of logistics vehicles are closely interwoven, not only from a technical point of view. They are among our lighthouse projects. WLS and UTF show how defense programs can be carried out in exemplary fashion. This success is the result of close cooperation built on mutual trust between the German parliament, the armed forces and the defense industry – for which great thanks are due to all those involved!”

Over 75% of the value added in the WLS and UTF projects is generated in Germany. In close coordination with the Bundeswehr, RMMV has boosted its UTF capacity to 1,000 vehicles per year. Against the background that logistical transport capacities are likely to increase further and more vehicles will be needed, the production capacity for the Bundeswehr will be further expanded. RMMV is also moving to greatly increase delivery capacity for WLS trucks.