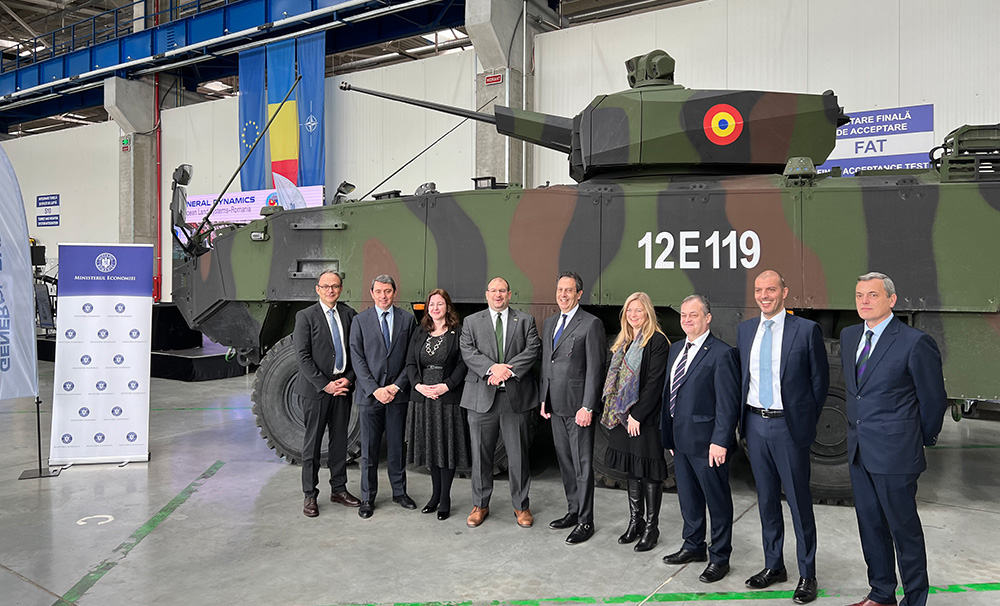 General Dynamics European Land Systems (GDELS)-Romania has signed an agreement for the creation of an industrial consortium with its strategic Romanian partner, C.N. ROMARM Uzina Mecanica Bucuresti (UMB), which marks a key milestone for the establishment of a national production capability for wheeled armored vehicles in Romania.

The signing ceremony took place in the vehicle production facility at UMB in Bucharest. The event was attended by the Prime Minister of Romania, Nicolae Ciuca, the Minister of National Defense, Vasile Dancu, the Minister of Economy, Florin Spătaru, as well as the U.S. Charge D’ Affairs to Romania, David Muniz and GDELS President, Alfonso Ramonet.

In January 2018, and as part of the Romanian Army’s plans to modernize its legacy wheeled armored vehicle fleet, GDELS signed a contract with the Romanian Ministry of Defense to deliver up to 227 PIRANHA 5 wheeled armored vehicles in six different configurations. With production progressing as planned, over 60 locally produced PIRANHA 5 vehicles have been delivered by GDELS to the Romanian Army since the program was launched. The signature of an industrial consortium between GDELS-Romania and UMB will bring this strategic cooperation between General Dynamics and Romania to a next level and is intended to assure the security of supply of PIRANHA 5 vehicles in the country.

“This consortium agreement between our companies represents a key element of our national security and makes the PIRANHA 5 program one of the best examples on how to bring advanced vehicle technology to our country,” said Mihai Rafiu, Managing Director of UMB.

”This strategic partnership and cooperation on our PIRANHA 5, one of the most advanced 8×8 wheeled armored vehicles in the world, demonstrates the clear and strong commitment of General Dynamics European Land Systems to become the leading and most reliable land systems supplier in Romania and for the Romanian Army,” added Marinica Mirzu, Managing Director of GDELS-Romania.