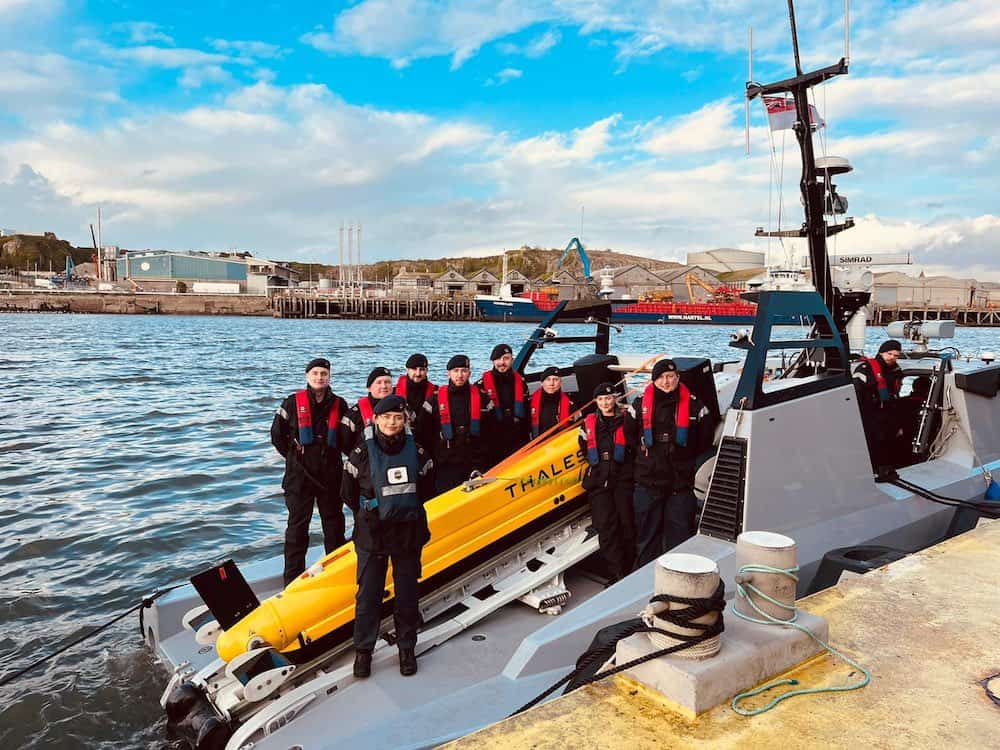 The Royal Navy has received an advanced remotely-operated mine-hunting demonstrator as part of the joint Maritime Mine Counter Measures (MMCM) program between the U.K. and France. France has also received a demonstrator system.

Now in the hands of the Royal Navy, the system, which comprises an Unmanned Surface Vessel (USV), towed sonar and a portable operation center, is commencing rigorous capability development trials.

The demonstrator was officially handed over to the Royal Navy in Plymouth on 23rd November by teams from the U.K. Ministry of Defense (MoD)’s Defense Equipment & Support (DE&S) agency, Thales UK and OCCAR.

“I am incredibly proud of all of the dedicated team members, both current and previous, who have worked collaboratively with their counterparts from France, OCCAR and Industry to make this happen,” said Andy Lapsley, Mine Hunting Capability team leader at DE&S.

“This world-class equipment is now in the hands of the Royal Navy, who have just begun the complex activity required to fully exploit its cutting-edge performance.”

Sea mines constitute a growing threat and users of the system will be able to detect and neutralize mines from miles away, ensuring they can keep vital sea lanes open, with much-reduced risk to ships and the lives of sailors.

“It is exciting to see the first delivery to the Royal Navy from the MMCM project. The future of mine warfare is here: the Royal Navy’s Mine Hunting Capability program is real; it’s happening; it’s delivering,” said Commodore Steve Prest Royal Navy, Deputy Director Navy Acquisition. “We have a lot to learn about this transformational approach to mine warfare, but there is much, much more to come.”

The demonstrator will enter an Operational Evaluation alongside further MMCM systems being delivered through a £184 million U.K. MoD investment agreed last year, which is supporting around 215 jobs in the U.K.

As well as at Thales UK sites in Somerset and Plymouth, jobs are also sustained in the wider supply chain at L3 Harris in Portsmouth, Stonehaven in Aberdeen and Alba Ultrasound in Glasgow.

“The delivery of the MMCM demonstrator systems to the U.K. and France is an important milestone for the program,” said Vice Admiral Chris Gardner, Director General Ships at DE&S. “This is a powerful example of how the joint commitment of the two Nations to work together under the auspices of the 2010 Lancaster House agreement can deliver world-class equipment for our Armed Forces.”

Eventually, the new mine-hunting capabilities are designed to replace crewed Mine Counter-Measure Vessels, such as the Royal Navy’s Hunt and Sandown class ships, with autonomous systems.