Scandinavian Avionics has replaced the old analog primary instruments with a Garmin G500 TXi display, which provides a better overview of primary flight data such as altitude and speed News By DA Reporter / 22 Jun 2022 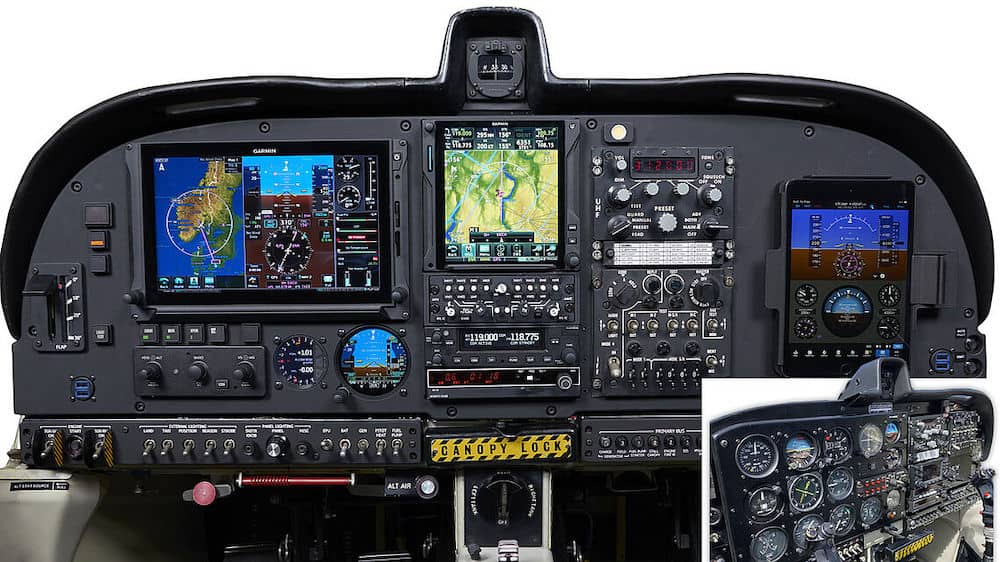 Before and after. Photo: Danish Armed Forces

The Danish Armed Forces has received an upgraded prototype of the SAAB T-17 Supporter pilot training aircraft after it successfully completed test flights.

SA Group’s Scandinavian Avionics was the main supplier of the prototype, which was handed over to the Danish Ministry of Defence Acquisition and Logistics Organisation (DALO) at the Danish Air Show in Karup, Denmark.

The original analog navigation and communication equipment has been dismantled and replaced by modern digital equipment.

The purpose of the prototype is to pave the way for a future proofing of the T-17 fleet, so that the type will be a relevant capacity for the Armed Forces on an ongoing basis. At the same time, up-to-date digital instrumentation means a more natural transition for new pilots to more complex platforms. Maintenance has also been significantly reduced, just as a smaller weight saving on the upgrade will reduce fuel consumption.

The original analog equipment in the cockpit has been replaced with digital touch screens and the option of wireless uploading of planning and relevant databases related to flight. The pilot’s old analog primary instruments have been replaced with a Garmin G500 TXi display, which provides a better overview of primary flight data such as altitude and speed. This includes digital EIS (Engine Indication System), which makes, among other things, the original engine and fuel instruments redundant.

The new GTN750Xi GPS is the pilot’s tool for navigation and communication, and a battery-powered GI275 standby indicator is installed in case the aircraft loses its primary power source. LED indicators are installed in the panel, which use less power and reduce the need for maintenance, as well as an ADS-B out solution, ensuring that statutory data on the identification and position of the aircraft is transmitted.

Scandinavian Avionics’ total delivery to DALO also includes specification and documentation of the prototype, which will form the basis for a forthcoming EU tender for modification of the Armed Forces’ T-17 fleet.

“The collaboration with Scandinavian Avionics, as the main supplier of the prototype, has emphasized the value of a close collaboration with the Danish defense industry,” said Jens Vinther, Major, Capacity Manager T-17, The Danish Ministry of Defence Acquisition and Logistics Organisation. “Scandinavian Avionics’ many years of experience in the field of aircraft avionics, together with their accommodating approach and immediate understanding of the needs of the Armed Forces, have in a short time ensured an excellent technical and future-proof operational solution. What Scandinavian Avionics has professionally delivered will also form the foundation for modification of the T-17 aircraft, which will ensure the continued relevance of the capacity for the Armed Forces for many years to come.”

In conjunction with the delivery of the prototype, Scandinavian Avionics has prepared a training program that will equip the military’s T-17 technicians to understand maintenance of the new systems. This training program is organized and performed by AEROTEAM Training Solutions, which is also part of The SA Group.

“In The SA Group we deliver, among other things, turn-key solutions to our customers, and this project is a perfect example, where we together with the Ministry of Defence Acquisition and Logistics Organisation have defined an optimal solution in terms of finances and functionality, designed the profound technical documentation, performed the actual installation and configuration, made the final test program and will in addition provide training of defense personnel,” said Hardy B. Truelsen, T-17 Project Manager, Founder & Chairman, Scandinavian Avionics A/S. “It has been a pleasure to work with the Armed Forces’ skilled employees and develop an optimal solution – the result speaks for itself.”

“The project has been characterized by a fantastic effort by everyone – including a flexible and professional ‘go minded’ attitude,” said Ole Torp (POL), Major, MSc, Test Pilot, Air Command Denmark. “The prototype is a pleasure to fly in, and I am really looking forward to using the aircraft properly and becoming even wiser about the systems – both on the pilot and the technician side. It is and will be an exciting time.”

The Danish Air Force has a total of 27 T-17 aircraft, with room for 2/3 personnel on board. The T-17 aircraft are used primarily as training aircraft for pilot training, but also for observation flights, connecting flights, maintenance of skills and much more.