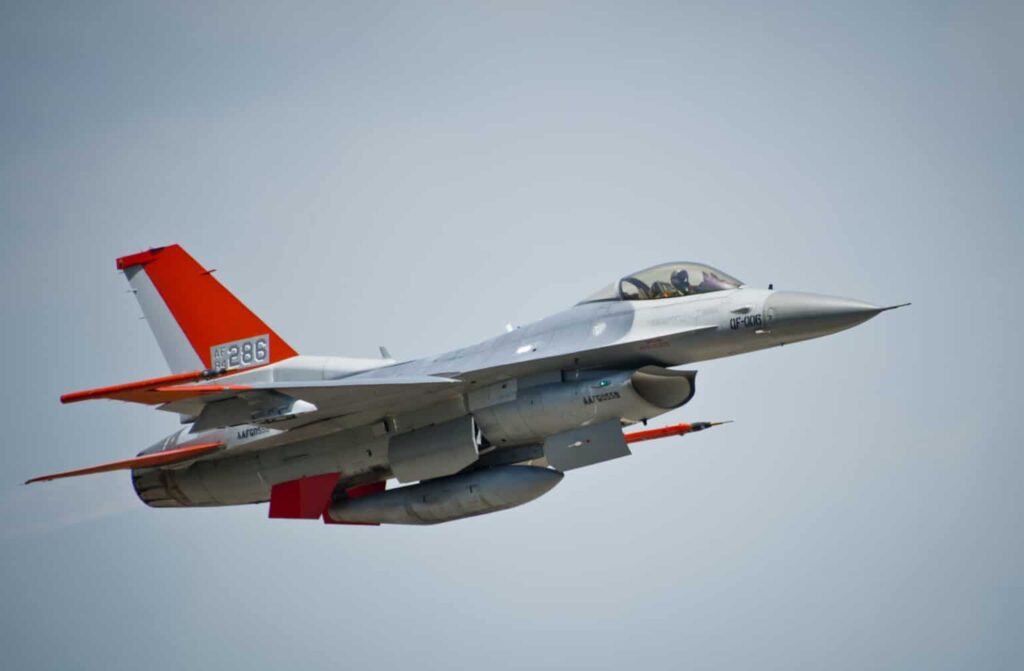 Lt. Col. Ryan Inman, 82nd Aerial Targets Squadron commander, flies a QF-16 across the horizon May 12 at Tyndall Air Force Base, Fla. The QF-16 is a Full Scale Aerial Target that has been modified to be flown with a pilot in the cockpit for training and also without a pilot as a target for live missile testing. The 82nd ATRS received their first QF-16 in September of 2014 and will continue to transition their full scale aerial target program to the new model over the next several months. The 82nd ATRS operates QF-4, QF-16 and BQM-167 targets to provide manned and unmanned aerial targets support for programs across the Department of Defense. (U.S. Air Force photo/Sara Vidoni)

“Our proven performance on advanced systems has made us the best partner to aid the Air Force in the latest, fourth-generation Full-Scale Aerial Target designed to test and evaluate U.S. weapons systems and assist in developing tactics, techniques and procedures to counter fighter-size airborne threats,” said Dr. Karl Spinnenweber, President of Amentum’s Critical Missions Group. “We are looking forward to providing critical support to assist in countering threats to our nation’s security.”

Under this contract, the Company will prepare, service, launch, recover, maintain, troubleshoot, and repair QF-16 Full-Scale Aerial Targets, Sub-Scale Aerial Targets, and associated support equipment at the Organizational and Intermediate Level and perform services for range instrumentation systems in support of the 53rd Weapons Evaluation Group.

The Company’s efforts include maintenance of on-board state-of-the-art scoring systems for the targets, continuance of sophisticated Range Instrumentation Systems to include drone control, range control and associated instrumentation and advanced communications systems.

Work will be performed at Tyndall Air Force Base, Florida, and Holloman AFB, New Mexico, and is expected to be completed by Sept. 30, 2029. The firm-fixed-price contract has a one-year base period and six one-year option periods.