The new contract includes the continuation of the existing in-service support, providing maintenance, engineering and supply chain services to the Royal Australian Air Force and provides the foundation for upgrades of mission systems bae-systems News By DA Reporter / 25 Feb 2022 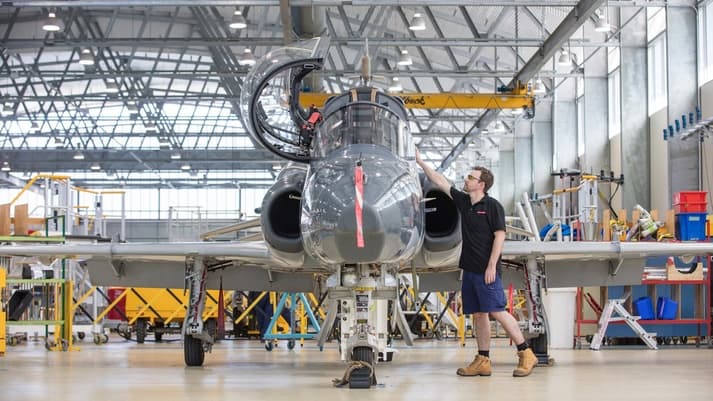 BAE Systems’ Hawk military aircraft trainer will continue to train Australia’s frontline fighter pilots through to 2031 after a A$1.5 billion commitment by the Australian Government.

BAE Systems’ Australian engineering teams, supported by teams in the U.K., will deliver a program of software and hardware upgrades to the Australian 33-strong Mk 127 Hawk fleet to ensure it continues to deliver highly-trained pilots to fly jets including the F-35 Lightning II.

The new contract includes the continuation of the existing in-service support, providing maintenance, engineering and supply chain services to the Royal Australian Air Force (RAAF) and provides the foundation for progressive upgrades of mission systems.

A Rolls-Royce 951 Adour engine upgrade for the Australian fleet will be incorporated by 2025 and will align the aircraft with the U.K. Royal Air Force’s T2 Hawk aircraft.

“Hawk is one of the world’s most successful jet trainers; with a global fleet of more than 650 aircraft, delivering highly-skilled pilots ready for the frontline of air forces across the world,” said Mike Swales, Head of International Markets, BAE Systems. “This commitment from the RAAF, which has more than 20 years’ experience operating Hawk, recognizes the important role the aircraft will continue to play at the heart of its training pipeline.”

There have been more than 1,000 aircraft sold, the majority exported from the U.K., delivering more than £16 billion to the nation’s economy from an initial £800 million investment.

In Australia, the Lead-In Fighter program sustains a combined direct and indirect highly skilled workforce of almost 900 people at BAE Systems Williamtown (NSW) facility and at RAAF Base Pearce, as well as a supply chain of 168 Australian businesses, many of which are based in the Hunter Valley.

BAE Systems delivers support to Hawk fleets around the world through in-country teams in the U.K., the Middle East and Far East and through engineering support services from the U.K., ensuring aircraft are available when and where they are needed.